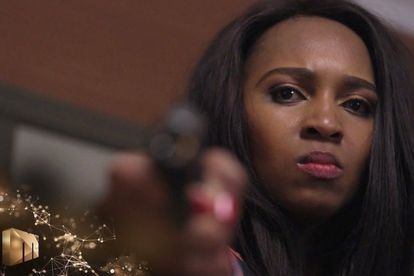 Gomora’s popular character Thati will return to the dark side in season three when she kills again … the teasers hint that she will shoot her husband – Phumlani in cold blood and that Gladys will file for divorce after being married to Melusi for years.

The popular telenovela is renewed for another season which will air in April.

The Gomora TVSA April teasers indicate that Thati will finally kill her abusive husband – Phumlani and that her high school sweetheart Melusi will finally get divorced from Gladys (Thembi Seete).

Thati will turn against Phumlani when she learns that he’s the mastermind behind all the kidnappings at Gomora Highschool, Melusi’s attempted murders, and when he starts abusing her.

The March teasers indicate that Phumlani will lose his cool when he learns that Thati and Melusi are meeting each other behind his back.

Melusi (Zolisa Xaluva) comforted Thati after her daughter got kidnapped.

The April teasers also state that Thati will disappear for a while after Phumlani (Buyile Mdladla) starts abusing her.

Even though the teasers don’t state the person Thati kills on the last day of April, we know that she won’t want him in her life anymore because he’s dangerous.

Phumlani underestimates Thati because she is sweet and has no idea that she is capable of murder.

Thati’s (Katlego Danke) family will also not be pleased by her actions because they love and adore him.

“Thathi cleans up after the murder.”

#TeamGladys on Twitter will be thrilled to know that she is going to file for divorce after being cheated on by Melusi with Thati.

Season three also indicates that Phumlani has deep hidden feelings for Mazet (Siphesihle Ndaba) and that he never loved Thati as fans predicted.

He is going to assist Mazet to walk after being shot and paralysed for several months..