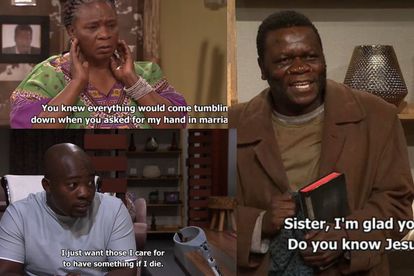 Sources from Muvhango production revealed to Daily Sun that actors MacDonald Ndou and Sydney Ramakuwela who played the roles of KK Mulaudzi and Mulalo Mukwevho for more than a decade were fired from the soapie.

“Cast members were shocked to find out that those two wouldn’t be returning to the show. This is because even though we don’t know what happened, some actors like Mukondeleli (Elsie Rasalanavho) were given contracts that would last half the new season. But clearly, their issue was big because they didn’t even get that chance.”

Another source informed Daily Sun that legendary actress Elsie Rasalanavho who played fan-favourite character Vho-Mukondeleli was shocked by her exit from the show and collapsed when she was told her contract won’t be renewed.

“She is not happy that she’s leaving and wasn’t expecting it.”

“When she told her contract would not be renewed, she collapsed and had to be admitted to the hospital.”

The drop could be because viewers have been complaining about the lack of direction in storylines, and constant introduction of new characters among many things.