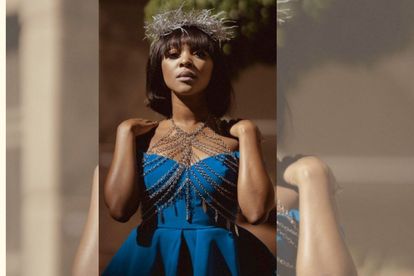 Rising star, Mbalenhle Mavimbela, who currently plays the role of Nothile on Skeem Saam recently discussed her journey to TV in an interview with Sowetan.

Mavimbela who got her big break on e.tv’s canned telenovela, Isipho as Thandazile bagged a leading role on Showmax’s hit telenovela, The Wife, as Hlomu.

The actress tells the publication that she grew up in the small town of Ladysmith, KwaZulu-Natal, and depicts herself as a bubbly child who loved to explore and experience the outdoors.

“I was quite an inquisitive child and loved being adventurous.”

“One would say I was rough because I was always outside playing with the boys.”

“I even have a scar on my chin because of my roughness.”

Her grandmother, Thembi Mavimbela, who passed away three months ago, and her mother, Tholakele Mavimbela, channelled her into the headstrong and strong-willed woman she is today.

“Although my grandmother didn’t fully understand what acting was, she was my biggest champion who’d always tune in to watch me act.”

She only realised she could evoke emotions when she took on drama lessons at Pinetown Girls’ High School.

Mavimbela adds that she used to wear her black drama kit even on days they didn’t have drama and used to get awards from her drama class.

FROM ‘SKEEM SAAM’, ‘THE WIFE’ TO HOLLYWOOD

She ventured into theatre because that’s where most actors learn discipline and acting skills and had to learn to hold an emotion when got her first role on TV.

The actress says her current character, Hlomu has had viewers raving and praising her for her execution of certain emotions.

“I’ve had people step up to me and tell me how great I am.”

“The most memorable moment was when Masasa Mbangeni approached me and told me how good of an actor I am.”

She tells the publication that Masasa Mbangeni’s affirmation brought tears to her eyes and reassured her that she’s really meant for this journey.

When she was asked what her future plans were, the actress said she plans to explore her acting skills in Hollywood and wants to act with the Tyler Perrys of the world.