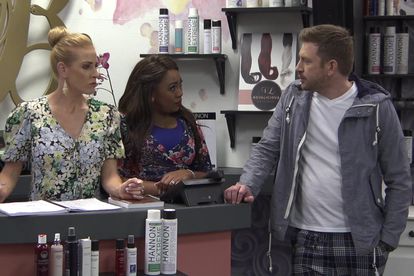 The South African fan-favourite soap Getroud Met Rugby recently saw a new character with the name of Meyer Burger show up, with many curious as to what this character will get up to.

In kykNET’s popular soap, Meyer first started working as a hairstylist at Bibi’s after a competing salon opens up in the same shopping centre. Ever since he made his Getroud Met Rugby debut, a range of women have been fighting it out to get a booking with Meyer.

But it is not necessarily why Meyer has tongues wagging. So far, the hairstylist, played by Stiaan Smith (known for films like Sy klink soos lente and Beurtkrag), provided some entertainment for his colleagues in the show, Bibi (Stephanie Petersen) en Maryke (Marijke Coetser).

While the “masculine” Meyer loves to make other people pretty and rugby all the same, the big question is mainly – as always in Getroud met Rugby – which team does he play for?

In the show, Meyer is aware of the fact that people question his sexuality, but that does not necessarily bother him. “I can identify with Meyer, in terms of his personality and outlook on life,” Stiaan told The South African.

“Meyer is an emotionally intelligent, open-minded man, who knows what he wants out of life. He is very independent, good friends with himself, and knows how to make people feel at ease.”

For these reasons, it doesn’t necessarily bother Meyer when some of Bibi’s clients start to make bookings with him, either.

It seems like Getroud Met Rugby has scoped out an interesting storyline for Meyer, one that audience members will enjoy.

“I like that he does not beat about the bush. He is straightforward about what he wants, honest about his feelings, and he expects the same from others.”

It is later established that Meyer is in fact gay. For someone who has never played a gay man or hairstylist, Stiaan says that he had some homework to do.

“I did have to do my homework in order to better understand what it means to be a gay man in today’s world, and how it affects one’s life on a social and professional level.”

Whether Meyer finds what he is looking for, remains to be seen.

Are you excited to find out more about Meyer? Watch Getroud Met Rugby Season 6, Mondays to Fridays on kykNET (DStv channel 144) at 18:00.