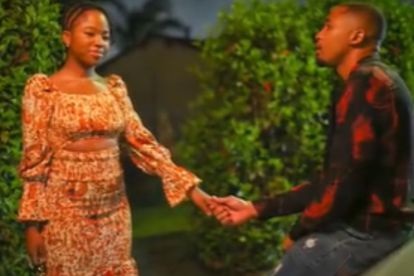 Actors falling in love on set, dating, or getting married after working on a telenovela or soapie is nothing new. While some soapie/telenovela couples made it work after the show ended, others broke up due to cheating scandals and fame. Here are nine South African soapie/telenovela couples from Uzalo, Generations, 7de Laan, Scandal!, Legacy, Isidingo, The Queen who found love on set, dated, broke up or got married off-screen:

A source from Uzalo revealed to Daily Sun on Wednesday, 24 August that actors Thuthuka Mthembu, who plays Nonka and Sandile Mfisi, who plays Kwanda are very much in love with each other in real life.

According to the insider, who is reportedly close to the Uzalo stars, the couple fell in love shortly after Mfisi, who is also a musician – joined the show this year.

“They are in love, but they want to keep it private because they don’t want it to affect their work. They don’t want the public to know,” the source claimed.

“After attending a colleague’s funeral over the weekend, Thuthuka posted their photo on WhatsApp and wrote ‘boyfriend and I’” said the source.

She penned an emotional tribute to her ex-husband and the father of her son Jamie Bartlett on her Instagram account this past June when the award-winning actor died from cardiac arrest.

“You are remembered. You are loved, Jamie. Be at peace, friend,” she concluded in the caption alongside a portrait of Jamie, Hector and herself.

Actors Kristen Raath and Markus Haywood, who played a married couple on 7de Laan reportedly called it quits three years ago following her exit from the soapie.

The actress, who openly revealed she was dating Haywood on her since deleted Instagram posts plays the vibrant character of Amorey Welman, while Haywood played her on-screen husband and cousin Willem Spies.

Raath returned to the show in 2021 to play the role of Amorey Welman after Haywood’s exit.

The pair made headlines in October 2020 following her split from the fellow actor and her suspension from work after arriving on set intoxicated.

Sunday World reported that the actress was fired by the producers days after she collapsed on set due to bullying by one of co-star Rapulana Seiphemo’s girlfriends at the SABC1 soapie and emotional fatigue.

Actors Jt Medupe and Lebohang Mthunzi, who played siblings on Generations: The Legacy surprised viewers when they hooked up off-screen and got married in real life.

The pair were the children of Tau Mogale played by Rapulana Seiphemo and Julia Motene played by Xolile Tshabalala on the show.

Legacy actress Jay Anstey announced in 2021 she was pregnant with her co-star Sean-Marco Vorster’s child.

The former Isidingo actress announced that she and Vorster will soon be parents to their first child on her Instagram account in 2021.

The pair have reportedly been dating for over a year after she broke up with long-term Top Billing TV presenter boyfriend Jonathan Boynton-Lee.

Former Scandal! actors Clint Brink and Lorcia Cooper, who played a couple in the now defunct Backstage as Shawn and Charmaine and a married couple on e.tv’s Scandal! reportedly dated in real life.

Cooper, wo returned to Scandal! In 2022 is now married to Mandela Khumalo, according to iHarare.

Former The Queen actress Pabee Moganedi told TshisaLIVE in 2020 how badly she was affected by the backlash when she started dating actor SK Khoza.

“I am in a relationship with a beautiful man with a big heart and we met in the workspace. We weren’t friends initially, we just bumped into each other on set and would see each other at events for promotional reasons for the show.

“And until at some point, we ended up being each other’s date at one of the events and it was a beautiful moment.”

The former lovers Khoza and Moganedi’s reportedly started dating after he left his baby mama for his former co-star in 2020.

Iharare revealed in 2020 that actors Loyiso McDonald, who played Kagiso Khoza and Zandile Msutwana, who played Vuyiswa Maake in The Queen first fell in love on the set of Zabalaza as a married couple.

The publication added that McDonald’s wife filed for divorce and sources from The Queen said his now ex-wife Luphiwo once caused a scene on set when she found out he was cheating on her with actress Zandile Msutwana.

Loyiso MacDonald and Zandile Msutwana affair is said to have started when the two acted as lovers on Zabalaza years back.