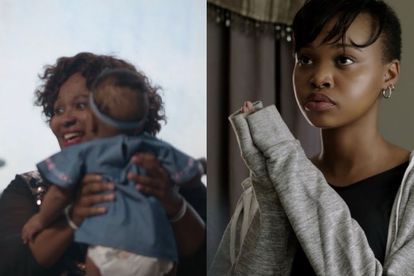 ‘This is the second Mbali’: #TheRiver fans react to Emma’s baby’s death. Images via Twitter @1Magic

‘This is the second Mbali’: #TheRiver fans react to Emma’s baby’s death. Images via Twitter @1Magic

The River fans are unimpressed with the writers for killing Zolani (Lawrence Maleka) and Emma’s daughter Mbali who passed away from a car accident similar to her late aunt Mbali (played by Zenokuhle Maseko).

The Estate actress Zenokuhle Maseko – who played Lindiwe Dikana’s daughter Mbali was written out a few seasons ago after her half-sister Tumi Mokoena-Dikana (played by Larona Moagi) caused her car to crash.

The River fans are devastated by the death of Emma and Zolani’s daughter Mbali – who got killed in the show last night (5 May).

Baby Mbali was admitted to the hospital with her mother Emma (Lunathi Mampofu) after crashing into another car.

The TVSA May teasers reveal that Emma will be blamed for her daughter’s death when she wakes up from the coma.

She went out with her cousin Beauty, drove while she was drunk, and bumped into another car.

The Thursday 12 May teaser also indicates that Emma will feel guilty.

“A mother feels guilty about a secret that she’s hiding.”

The Wednesday 18 May teaser reads:

“A grieving mother finds herself at the end of her tether with the hate she’s getting from her family.”

This teaser indicates that the Dikanas won’t forgive Emma after her daughter’s death.

Baby Mbali was named after her late aunt Mbali (Lindiwe’s daughter) who dies in The River season two finale.

Mbali died tragically after driving the car Tumi fiddled hoping that Lindiwe would drive it.

ALSO READ:‘The River’ May Spoilers: Will Lindiwe or Emma lose a child?

A sangoma in season two revealed that Lindiwe will lose her children and grandchildren as punishment for all the people she murdered.

The sangoma also offered to cleanse Lindiwe (Sindi Dlathu) from her evil deeds so she can start over but she refused.

“Yoh that wasn’t acting that was being. Yoh.”

“No. Not because of Beauty, yes Beauty is a bad influence but the accident was all because of a bad decision taken by a person who saw nothing wrong in drinking and driving and taking a child on a joy ride.”

“Emma had an option to call a driver and she did not. Beauty was not driving.”

“In fact, I blame all those that kept on complaining and saying Lindiwe is always winning now they are killing all her kids and grandkids this is terrible. “

“Mbali was so adorable bathong.”