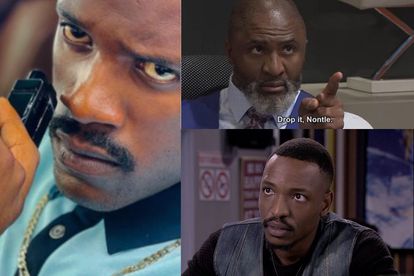 Psychopaths from ‘The Wife’, ‘Scandal!’ and ‘Generations’ we love to hate. Images via Twitter @Gen_Legacy, @etvScandal and Instagram @bonkokhoza

Psychopaths from ‘The Wife’, ‘Scandal!’ and ‘Generations’ we love to hate. Images via Twitter @Gen_Legacy, @etvScandal and Instagram @bonkokhoza

Viewers have projected themselves onto the following psychopaths; The Wife’s Mqhele, Scandal!’s Amo, and Generations: The Legacy’s Nkosiyabo and are rooting for their desires.

Fans can’t help but love and sympathise with them – whether they’re winning the loves of their lives, losing control or coping with a loss.

‘THE WIFE’: WHO IS THE REAL MQHELE?

The Wife, Scandal! And Generations: The Legacy fans are perplexed by Mqhele, Amo, and Nkosiyabo.

While audiences are entertained by his struggle to control his anger towards his wife’s personality, infidelities, and his issues, they also realise that perhaps stepping into the dark side might be the best thing for him.

‘SCANDAL!’: AMO IS A PSYCHOPATH

The Scandal! TVSA March teasers have hinted that Hlengiwe’s breakup with Amo has unleashed a psychotic side of him.

Amo seemed like a normal guy at the office until Hlengiwe (Nqobile Khumalo) dumped him for another guy. He’s in denial about their breakup and even refused to move out of their apartment.

Fans have now labelled him ‘Mr Later’ after he kept postponing their breakup to later.

#TeamHlengiwe is now worried about her safety because they’ve never seen this side of Amo before.

All the red flags are there…that Amo (Kagiso Rathebe) is not completely well upstairs.

“A man struggles to accept that no means no.”

ALSO READ:Is Sphe the Brooke Logan of ‘Generations: The Legacy’ or unlucky in love?

‘GENERATIONS: THE LEGACY’: NKOSIYABO IS A DANGEROUS

Generations: The Legacy actor Muzi Mthabela – who plays the character of Nkosiyabo Cele has evil written all over him.

The show may try to hide his villainy but it’s become clear that Mthabela’s latest role has replaced soapville’s most-hated character – Jack Mabaso.

Nkosi is similar to Vusi Kunene’s character – who exited the soapie to play Funani Zwide in e.tv’s fashion drama – House of Zwide.

In the show, Nkosiyabo has moved into Jack’s house and plays a fatherly role to Sphesihle just like Jack.

Fans of the soapie are about to love and hate him, even more, when he falls in love with Ayanda Majola – who is married to Detective Pele.

Nkosiyabo is going to try to control, manipulate, and possess Ayanda and will even try to make her leave her husband.