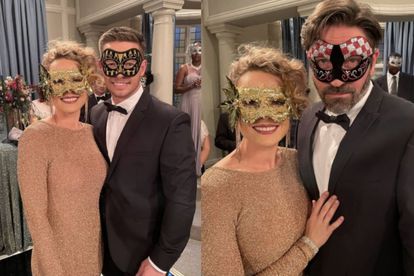 Actress Reandi Grey, who plays the role of Esti Fouche on SABC 2’s Afrikaans soapie 7de Laan, surprised viewers when she returned this week after lying in a coma for a year.

It turns out she recovered two weeks ago and secretly went through therapy until she was well enough to walk again.

She returned to Hillside at Mariaan Wellman’s (Deirdre Wolhuter) masked ball and witnessed her husband dancing and making out with Lana (Mila Guy).

Then, in a shocking twist, Rickus asked her to marry him again in front of Lana when Esti finally revealed herself.

Esti rejected Rickus’s proposal after she was told that they’re no longer married and ran to Marko’s (Francois Lensley) apartment and declared her feeling for him again.

Fans were furious with Rickus for breaking Lana’s heart by proposing marriage to his ex-wife in front of everyone.

André Lötter who plays Rickus on the Afrikaans soapie, surprised his fans a few days ago when he took to his Instagram account to reveal that he has joined the cast of M-Net’s telenovela Legacy season two, where Grey plays the role of Elizabeth Price.

His revelation confused viewers of 7de Laan just as his love triangle with Grey and Lensley is getting heated.

His announcement has also excited viewers as they’re now hoping that his character and Elizabeth Price will date on Legacy.

The show’s publicity team stated that they’ve accommodated Lotter to film at Legacy so he can appear in both shows.

Quote of the Day – Bonang Matheba

The story of Pelé: an icon who put passion at the heart of soccer