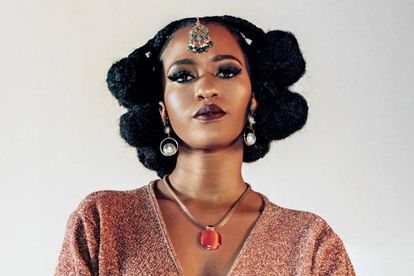 Mpho Sebina stuns on the remake of Brenda Fassie’s classic hit ‘Too Late For Mama’. Image via Twitter @BraamVibesPR

Mpho Sebina stuns on the remake of Brenda Fassie’s classic hit ‘Too Late For Mama’. Image via Twitter @BraamVibesPR

Brenda Fassie is one of South Africa’s most popular musicians. She is known for her songs Weekend Special, Nomakanjani and Vul’indela amongst several others. Her classic track Too Late for Mama has been remade by Botswana-born songstress Mpho Sebina. The track marks the first release of Gallo Record Company’s series of remixes.

ALSO READ: Bongani Fassie is remixing his mother’s hits with an amapiano twist!

‘TOO LATE FOR MAMA’ REMAKE

Producer Sello Chicco Twala was the producer and composer for Brenda Fassie’s iconic hit Too Late for Mama. He told Sowetan in October that Mpho Sebina did justice to the song. He praised her version of the song for being different and interesting.

“What I like about it is that the original was of that time and she [Sebina] made it to be of the present time. She has done a great job. The producers did a good job too.”

“If Brenda was here, she would be proud; Brenda used to like up-and-coming singers.”

“Alicia Keys sang that song and she couldn’t get it right. A lot of people have also tried and when Gallo told me that they have found someone, I never believed that she would crack it, especially after Alicia Keys had challenges getting it right.”

Mpho Sebina often releases soft R&B music and shared that although Too Late For Mama was out of her comfort zone, coming out of her shell was her favourite part of the process.

“At first I was made excited when I was asked and honoured to remake one of our heroes. But as the process was going further it was just pure nerves.”

The official music video for the track was released on Friday 19 November. The video was directed by Seriti Films and it’s a simple black and white visual.

The Too Late For Mama remake was produced by DJ Kenza and Favi Motsemme and executive produced by Black Coffee.

WATCH THE ‘TOO LATE FOR MAMA’ MUSIC VIDEO HERE

Mpho Sebina was in the advertising industry before making the transition to music. The 30-year-old musician has wowed fans with her features on some of the biggest amapiano songs, adding her soulful touch to the vocals.

Her 2020 album Lora has gems on it and shows off her phenomenal tone. A few highlights from the album include Melodi, Dumelang and Lora.