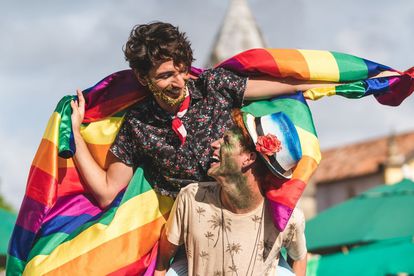 WHAT IS INTERNATIONAL PRONOUNS DAY?

International Pronouns Day is celebrated on the third Wednesday of October every year. The day is about respecting, sharing, and educating people about personal pronouns. Referring to people by the wrong pronouns particularly affects transgender and gender nonconforming people.

Making assumptions about someone’s gender identity is dangerous and offensive, as you might misgender them, so its always important to check with them!

“It can be offensive or harassing to guess at someone’s pronouns and refer to them using those pronouns, if that is not how that person wants to be known,” writes the MyPronouns organisation.

According to The New School in New York, these are some of the pronouns you might hear.

There are also people who use “she/they” or “he/they” pronouns, but most of the time they will specify which pronouns they prefer they most.

One thing you should always avoid is referring to someone as “it” or “he-she”. This is extremely offensive in the LGBTQI+ community.

Remember that it is natural to make mistakes with someone’s pronouns, but it is important to be interested in learning.

American LGBTQI+ activist Rodrigo Lehtinen says stating pronouns at the bottom of an email or during a work meeting could also help.

Juno star Elliot Page came out as a transgender man in December last year. The actor has expressed that his pronouns are “He/They” but he prefers “He”.

Demi Lovato came out as non-binary and shared that even they misgender themselves! “I’m just grateful for your effort in trying to remember what means so much to my healing process.”

Singer-songwriter and mom-of-one Halsey identifies as bisexual. The Now or Never hitmaker uses both she and they pronouns.

British singer-songwriter Sam Smith said they felt as much woman as they are man. In another interview Smith said: “I’m not male or female. I think I float somewhere in between.”