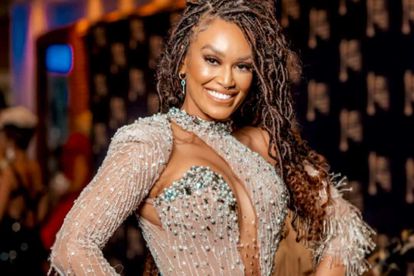 The picture suggests the presence of a new love interest in her life. However, Thusi strategically omitted his face, thus keeping his identity a secret.

The Queen Sono star is filming in Thailand, but took to Instagram to post an intimate picture of her and her mystery bae playing footsie under the water. Thusi captioned the picture with a heart emoji and “#missyou”.

She also tweeted a picture of herself snuggled up next to her mystery bae in a pool. However, she made sure not to reveal his identity by cropping off his face. She captioned the tweet:

In English the caption simply means she misses him and that COVID-19 has made it hard for relationships.

The Quantico star wrote another tweet, but both tweets have since been removed:

“There’s nothing quite like finding someone you genuinely love and that person feels just the same about you.”

Fans of the actress were happy to see her find love again as she was previously not so lucky in love. Her last mention of a love interest was back in 2017, when she was rumoured to be dating NBA star Serge Ibaka. However, neither Thusi or Ibaka confirmed the rumours.

Here are a few of Thusi’s previous love interests that all had one thing in common: Sport.

Thusi was previously engaged to Robert Marawa, a journalist and SuperSport presenter. The pair did not end up tying the knot as they split in 2017.

Mokoena is one of the most successful sports presenters in South Africa. He previously worked at the SABC and is now a special advisor to the Minister of Sport, Arts and Culture. In the late 2000s, Thusi was in a relationship with Mokoena. They had a child, Thandolwethu, together, and are making the blended family work well.

American football player Quinton Jones was rumoured to have been in a relationship with Thusi. However, neither of them confirmed the relationship. Jones is now married to Minnie Dlamini-Jones and the couple welcomed a baby together in November 2020.

Renowned entertainment commentator Kgopolo Mphela confirmed the news in a tweet. He said Thusi joined was joining the cast of Netflix martial arts series Wu Assassins, which is being shot in Thailand.

Thusi has said she was jetting of to Thailand. In another recent Instagram post she is seen training to fight.

Thusi followed this up with a videos showing off her impressive new skills.