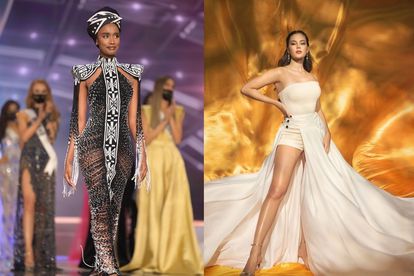 Catriona Gray and Zozibini Tunzi both have one thing in common – The Miss Universe crown. These two women are set to be the backstage presenters at the Miss SA pageant on Saturday 16 October in Cape Town.

Catriona Gray will host the pre-show at the Miss SA pageant in Cape Town. The Filipino-Australian model and singer will be visiting South Africa for the second time.

Catriona made history as the first Filipino woman to represent the Philippines at the Miss World and Miss Universe pageants. She made the top five in the Miss World pageant. Gray was also on the judging panel that crowned Zozibini Tunzi Miss South Africa in 2019.

Not only will she be the pre-show host but she will also be a backstage presenter with Zozibini Tunzi. Catriona shared her excitement on her Instagram pages.

“I’m so so excited to be returning to your beautiful Rainbow Nation as your PRE-SHOW and BACKSTAGE HOST for the upcoming Miss South Africa pageant.”

“I love Catriona. Not only did she crown me for Miss Universe, but she was there for the beginning of my journey as she was a judge for Miss SA 2019 when I won. There’s a special connection there and I can’t wait to share the platform with her.”

EVERYTHING YOU NEED TO KNOW ABOUT MISS SA

The Miss SA pageant will be hosted by actor and Survivor SA presenter Nico Panagio. He will be joined by 947 radio host Anele Mdoda who was previously a Miss South Africa judge.

The Miss SA pre-show will kick off at 16:00 on the Miss SA website, The pageant will take place on Saturday 16 October at Grand Arena in GrandWest, Cape Town at 17:00. The pageant will be screened live on M-Net and Mzansi Magic and will also be available online.