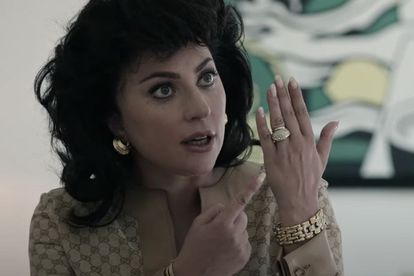 The first trailer for Ridley Scott’s House of Gucci was released on Friday 30 July and a second trailer has just been released that centres around American songstress Lady Gaga’s performance as Patrizia Reggiani.

ALSO READ: Sandra Bullock returns to the big screen in ‘The Unforgivable’ [watch]

LADY GAGA AND ‘HOUSE OF GUCCI’

House of Gucci is based on Sara Gay Forden’s book The House of Gucci: A Sensational Story of Murder, Madness, Glamour and Greed that follows the family behind the luxury Italian fashion empire, Gucci.

The film features an all-star cast. The likes of Jared Leto, Salma Hayek, Al Pacino and Camille Cottin are set to appear on the big screen next to Lady Gaga and Adam Driver.

House of Gucci was directed by Ridley Scott and written by Becky Johnson. The screenplay is by Becky Johnston and Roberto Bentivegna.

While the first trailer gave fans an overview of House of Gucci, it’s the second trailer that has everybody gushing over the Grammy award-winning singer.

Lady Gaga steals the show with her Italian accent and her exceptional acting skills.

English director Ridley Scott has worked on several Hollywood films including the 1982 Blade Runner, the 2007 film American Gangster and the 2015 Will Smith-led film Concussion. The Emmy award-winning director is the perfect candidate for this one.

“House of Gucci is inspired by the shocking true story of the family empire behind the Italian fashion house of Gucci. Spanning three decades of love, betrayal, decadence, revenge, and ultimately murder, we see what a name means, what it’s worth, and how far a family will go for control,” writes Metro-Goldyn-Mayer Studios.

The film will be released in US cinemas on Wednesday 24 November.