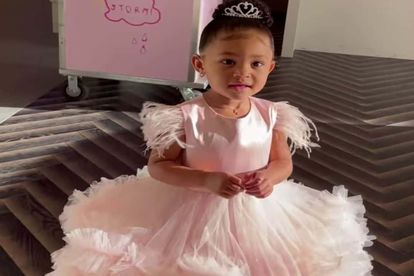 Stormi Webster on her third birthday. Image via Instagram @KylieJenner

Stormi Webster on her third birthday. Image via Instagram @KylieJenner

Reality TV star and make-up mogul Kylie Jenner celebrated daughter Stormi birthday on 1 February. The little girl got a “Stormi World Three” party and a pre-birthday girls’ trip with Kylie’s sisters and nieces to an island near the Bahamas.

The third instalment of the annual “Stormi World” celebration took place on a much smaller scale than usual. The guest list was kept to family so Stormi could have a “cousin party” with just one inflatable slide. However, the decorations did not fall short of Kylie’s high standard with balloons, a candy bar and food truck.

“Stormi World Three is cancelled for obvious reasons but I still went all out for Stormi at my house. We are just doing a cousin party with all her cousins and just my family, which will still be amazing,” Kylie said on Instagram.

Kylie had also gone all out at Christmas to give Stormi a festive season to remember.

According to Elle, the Kardashian-Jenner family did not follow the COVID-19 restrictions put in place by Los Angeles County that prohibits all public and private gatherings of any number of people.

The guests at the party also did not appear to be wearing masks.

The Kardashian-Jenner family shared lots of posts to celebrate the birthday girl. Kylie shared an emotional post thanking God for Stormi. She said the birthday was bitter-sweet as she was sad her daughter was growing up so fast.

Grandmother Kris Jenner shared how special Stormi was to her and the family.

Aunt Kendall Jenner shared a snap of her kissing Stormi’s face on Instagram.

Kylie started Stormi’s birthday celebrations with a trip to Turks and Caicos. This coral island group southeast of the Bahamas has opened for tourism under certain COVID-19 restrictions.

INSIDE THE GIRLS’ PRE-BIRTHDAY TRIP

Kim bonded with daughters North and Chicago, and shared a bikini snap.

Kourtney, on the other hand, kept the bikini pictures coming all weekend.

Khloe stunned in a sheer blue dress and Kylie served different looks from dresses to bikinis.