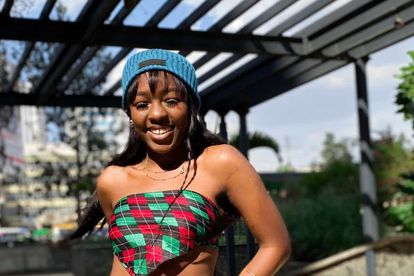 Even though she’s only 19, Kenyan student Elsa Majimbo is drawing international attention and deals with big-name brands for her hilarious homemade video skits.

The most recent collab for the teen is with megastar singer Rihanna’s fashion label, Fenty.

For the partnership, Elsa posted a campaign video of herself in several of the brand’s luxurious sunglasses. And the views on her own Instagram feed far outrank those on the Fenty page.

Who is Elsa Majimbo?

Journalism student Elsa started to make a name for herself in April this year when she posted a video making fun of the lockdown and social distancing.

No stranger to making videos, Elsa hit the fame button with this one and now has hundreds of thousands of followers on Twitter and Instagram.

Her videos are never complete without her crunching chips and leaning back on her pillow while donning a retro pair of sunglasses as a prop.

Not only are her videos funny and witty, but they are relatable and current, making her a favourite on the social streets.

Most collaboration videos feature a whole production team, models, makeup, the works. However, Elsa stayed true to her natural self in the video, which is less than a minute long.

She stuck to what works for her, which is shooting with her iPhone 6 and, in her words, “under editing”.

And in case you are wondering what Elsa’s new name is, it is MONEY! By Wednesday afternoon 23 September, the video had close to 590 000 views on Instagram alone.

Of course, a few collaborations here and there did not hurt and many celebrities are turning to the fashion house for their clothing.

This isn’t the first time that the world has noticed Elsa, however.  Anderson Cooper of CNN, The Guardian and many African and South African newspapers have featured her.

She has also managed to land herself a deal with MAC cosmetics and also made an appearance on Comedy Central in June 2020.