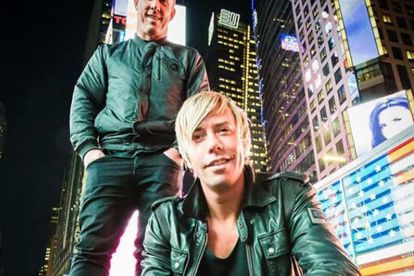 South African electronic DJ duo GoldFish performed at the famous Belly Up Tavern in San Diego this past weekend for the first post-lockdown livestream show on stage.

The group collaborated with singer-songwriters Nate Highfield and Silver on the song, Forever Free. The track also has an accompanying animated music video.

Poole says part of the reason for moving to California was to be able to collaborate with artists, especially musicians like Highfield and Silver.

The two musicians have been working on the new single for quite a while and quarantine pushed them to release the track.

Peters compares the process to that of a sculptor creating a statue out of a block of marble.

“You’re going around this piece of marble, gently trying to chip away, thinking, ‘did that work? Is that good?’” he says.

Matt Torode and Mike Scott animated the Forever Free music video. It is part of a series of animated videos that portray the animated Peters and Poole on their adventures through life.

This specific one is semi-autobiographical, portraying the two musicians struggling through the daily grind of 9-to-5 to save up for DJ school. It is the perfect mix of social commentary and fun.

On Saturday 27 September, they took to the stage of the Belly Up Tavern in San Diego for a live-streamed show.

The venue is iconic as legends such as the Red Hot Chilli Peppers, the Rolling Stones and The Killers have all performed there.

“Playing in a real venue again was an amazing experience. Being on that legendary stage playing with amazing sound and lighting made it.

Swedish presenter Renée Nyberg  hosted the virtual concert for the South African NGO which raises awareness of the need for a “safe space” for all children.

“[Project Playground] is doing such great work so we had to jump in and help out with a live performance,” said Poole.

“It’s always great to see people helping others, especially when it’s children as you can have such a profound effect on their lives by giving your positivity to them.”

The band on tour

The duo toured Brazil in 2019 and played at some extraordinary venues there and in the United States, including the Red Rocks Amphitheatre in Colorado. Red Rocks has been one of their favourite venues to play.

In South Africa, they have a soft spot for Kirstenbosch Botanical Gardens and Peters gets a tad emotional as he reminisces about their previous shows there.

“It is South Africa’s Red Rocks I’d say. You are in a world heritage site, with the beautiful mountain just glooming over you,” Peters said.

“We grew up wanting to play there, and now it has happened countless times, but it’ll never get old.”

They say that an album to accompany Forever Free is on its way, and they have decided to go back to their roots with it.

Their album, Get Busy Living, celebrates its 10th anniversary this year. In addition, signed copies of the 2005 album Caught In The Loop are now available on vinyl.