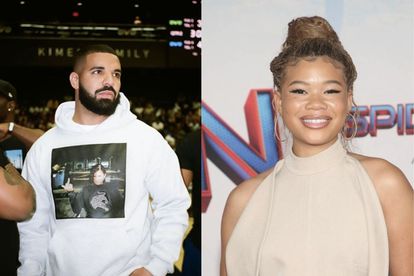 Drake has been praised by Storm Reid for his commitment to season two of Euphoria. Image via Twitter @FilmNewsWeb/hourleyaubrey

Drake has been praised by Storm Reid for his commitment to season two of Euphoria. Image via Twitter @FilmNewsWeb/hourleyaubrey

Drake was “really involved” in season two of Euphoria.

Storm Reid – who plays Gia Bennett in the hit US teen drama – has shared how impressed she was that the 35-year-old megastar, who is an executive producer on the show, sat through their three-hour table read.

ALSO READ: ‘Euphoria’: Zendaya is back in the most anticipated returning show of 2022

Appearing on The Kelly Clarkson Show this week, the 18-year-old actress said:

“He’s [Drake] really involved. We were doing table reads for season two a couple of months back, and of course, like you’re not expecting Drake to be at your table read.”

“I pull up to the lot and he’s there with all of his homies, it’s him and then his business partner, Future the Prince, and they literally sat through, I think it was a three-hour table read ’cause we went through a couple of episodes.”

“He was so involved and so in tune and you don’t really expect that from a person. I know that he’s a brilliant businessman and creative. But I mean he’s Drake, he doesn’t really have to pay attention in the table read and he did. He did come from acting, so it makes sense.”

DRAKE WAS ‘IN TUNE’ DURING ‘EUPHORIA’ TABLE READ

The A Wrinkle in Time star could see that the God’s Plan hitmaker, 35, was really “feeling all the emotion” as he read through the script.

“He’s so in tune, and of course I was kind of looking at him to see if he was actually paying attention and turning his pages, and you could tell he was feeling all the emotion. I was like, ‘OK, Drake,'” she added.

Zendaya – who plays the leading role of Rue Bennett – recently gushed that they were “lucky” to have Drake on board. The 25-year-old star said:

“I don’t know if he was involved in the casting, but I will say we’re lucky to have someone who believes in the show.”