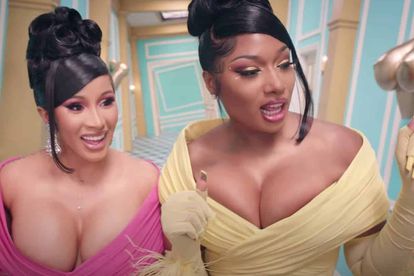 Cardi B, left, and Megan Thee Stallion in their ‘WAP’ music video. Image via YouTube

Cardi B, left, and Megan Thee Stallion in their ‘WAP’ music video. Image via YouTube

Cardi B told a fan on Twitter that the video for her and Megan Thee Stallion’s explicit song cost $1 million (R14.9 million) to make.

The video for the 2020 hit song was shot at a mansion with live snakes, and also featured Kylie Jenner and Normani.

She wrote: “Fun fact: Bodak Yellow music video cost me $15,000. I was in Dubai and I said… I gotta fly picture [videographer] out here… BOOM BOOM BANG! Ya know the rest.”

MEGAN AND CARDI SCARED OF SNAKES

Meanwhile, Megan recently revealed she and Cardi were terrified of shooting with the snakes for WAP.

They were initially hesitant as neither of them had been around the reptiles before. The Savage hitmaker eventually “made friends” with one of them though Cardi B wasn’t as comfortable.

Megan said: “OK, so what’s crazy is neither one of us had been around snakes before… I was like, ‘friend, I don’t know if I can lay in snakes’.”

“But Cardi B asked me to lay in some snakes, I’ve got to lay in the snakes for my girl… I made friends with one who was on me the whole time. Cardi was so scared.”

Megan Thee Stallion: ‘WAP’ is about women owning their bodies

Megan, 25, said on The Jonathan Ross Show that she was pleased with the positive response to the track and didn’t care about people who were “offended” by the extremely raunchy lyrics.

She said: “I really appreciate all the positive comments. The song is about women owning their bodies, their sexuality. I don’t know why me talking about my WAP is offending anyone. Forget what the haters have to say.

“Sometimes when women speak about sex it makes people feel uncomfortable. It’s 2020, why am I not allowed to talk about my body? Let me talk about what I’m going to do to you.”