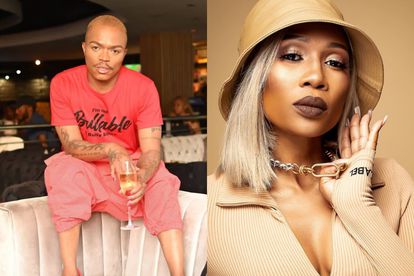 Tweeps think that South African radio presenter Dineo Ranaka is the perfect replacement for Somizi Mhlongo on Idols SA following her appearance as a guest judge on the show last night (26 September).

At the beginning of August, leaked audio clips revealed that Mohale Motaung claimed he was abused by his estranged husband, Somizi Mhlongo. This led to Multichoice announcing that the former radio host would be taking some time off from his judge role on Idols SA until the abuse allegations were resolved.

Somizi denied the abuse allegations made against him. However, Mohale Motaung affirmed that he was actually abused by his estranged husband. So the media personality’s “time off” went on longer than he expected. Instead of replacing the fan favourite judge, Idols SA decided to bring in a new guest judge each week.

However, fans seemed to have lost interest in the competition during Somizi’s absence. Subsequently, the ratings off the show began to fall. That was until Dineo Ranaka took her seat on the judging panel.

Dineo Ranaka was previously Somizi’s co-host on their morning show The Bridge on Metro FM. This was before the South African Broadcasting Corporation (SABC) announced that he would be taking some time off, also due to the abuse allegations. Tweeps were heartbroken for the last few weeks when Somizi was not on Idols SA. Many expressed they were no longer interested in watching the competition.

However, Tweeps have had a change of heart after watching Dineo Ranaka take a seat on the judging panel this weekend. Many expressed that they believe she is an “amazing fit” and the best suited replacement for the media personality.

Others expressed that they are both great judges and no one could replace Somizi.

While Dineo Ranaka was trending on Twitter for being the best replacement for Somizi, the media personality posted a series of pictures on Instagram. In one specific post, he shared an experience of how a taxi driver screamed for him in the middle of traffic that he caused.

He went on to say that there is only one Somizi which may have been a dig at Dineo Ranaka.

“So i was leaving pta i decided to take pics and i was in the middle of the road and blocked traffic and in front of the traffic was a taxi….he blew his horn and screamed my name i left everything and hopped into the taxi….i love my people and my country….but i guess there can only be one SOMIZI,” he wrote on Instagram.