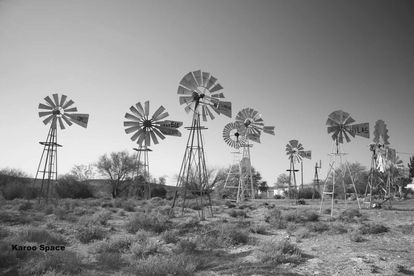 Windmills of the Karoo, one of the countless evocative images captured by the Karoo Space team. Image: Supplied

Windmills of the Karoo, one of the countless evocative images captured by the Karoo Space team. Image: Supplied

The intrepid couple, who call the Karoo town of Cradock home, have spent more than a decade criss-crossing this vast region of South Africa in search of its fascinating people, places, spaces and legends.

They have written about their colourful encounters for the likes of Country Life magazine, sadly one of the media industry casualties of the coronavirus pandemic, and have self-published numerous non-fiction titles, including the Karoo Keepsakes series, which have all been very well received.

The South African caught up with “Chris and Jules”, as many in the Karoo know them, to chat about their new book, Karoo Roads – Tales from South Africa’s Heartland, and find out what projects and adventures they’re embarking on next.

What drew you to the Karoo, and did you ever think it would provide the foundation for a whole new life and career path?

We were on a chance road trip through the Eastern Cape in 2003, when we met Sandra Antrobus and family at the Tuishuise in Cradock.

After a Sunday farm lunch with Sandra and her husband Michael (who, sadly, passed away two years ago), we decided this was the kind of community we wanted to live in: tough, with a good sense of humour, reliable, warm, welcoming and very trustworthy people.

We initially planned to restrict our editorial movements to the Eastern Cape, but the call of the Karoo made us shift our focus to the dry spaces of three other provinces as well: the Western Cape, Free State and Northern Cape.

The stories seemed to be richer, more plentiful, seldom told and the photographic potential was immense. It was, really, like discovering a whole new country.

Since when has Cradock been home and has it served you well as a base for exploring the Karoo?

We have lived in Cradock since the beginning of 2007. For us, it is the perfect springboard into the rest of the Karoo. We also do a lot of non-fiction work with Rhodes University in Makhanda, so Cradock is central for that as well.

For a Karoo storyteller, Cradock is a great base. The old families are here with their incredible histories, one of the finest national parks in the country is 10 minutes from our front door and the town has all the amenities for digital nomad work, with Port Elizabeth a one-day round-trip away.

Define the Karoo in terms of geography and size.

The Karoo is a biologically distinct ‘country’ which sprawls over 400,000 square kilometres, making it a little bigger than Germany.

There are around 100 Karoo towns, settlements and villages, a few thousand farms, and a million people in an area that includes four provinces – the Northern Cape, Western Cape, Eastern Cape and southern Free State.

What makes the Karoo a good hunting ground for ‘people stories’?

The people of the Karoo are, on the whole, very interesting because many of them are ‘immigrants’ from somewhere else who end up being tough, resilient, able to live lean, think out of the box, work together as a community and reach out between the different groups.

Many of us are also seen as creative and a little eccentric, which adds to the fun element of being here. You dress like you want, you play Jimi Hendrix to your sheep, you dance in the rain, you party like there’s no tomorrow and then you work hard as well.

But the bedrock of the Karoo lies in families of all colours that have been here for hundreds of years – up to eight generations or more. They, too, have incredible stories to tell and deep knowledge of the region.

Some of the best dryland farmers in the country, or possibly the continent, are from the Karoo. They are national treasures. Intellectual capital has also been steadily growing in previously moribund Karoo towns, with creative people semigrating from cities to the platteland.

What mileage have you clocked up since covering the Karoo in earnest?

We’ve covered well in excess of 500,000km, nearly 70% of which was in our old Isuzu KB 2003 bakkie, which was completely reconditioned in 2019 by CAT Motors, the local Isuzu dealer. This tells you a lot about the quality of local support that we get.

Besides Cradock, do you have any favourite Karoo towns?

That’s our Top 22, but there are 79 more towns, villages, settlements and occupied railway sidings, each with its own special star.

What are the most underrated Karoo towns in your view?

That would be little Kalahari river towns along the Orange, from Upington to Keimoes, Kakamas, Kanon Eiland, Pella and Pofadder in the Northern Cape. Then into the Richtersveld, part of the Nama Karoo region, the little settlements like Khuboes, Lekkersing and Eksteenfontein.

The most underrated town? That’s a hard one, because there’s a different perfect Karoo town out there for everyone. We like Rietbron (between Beaufort West, Willomore and Aberdeen) as an underrated Karoo village. Also Vosburg in the Northern Cape — tiny, yet full of interesting people.

Life after Country Life has been very busy.

Describe ‘Karoo Roads’ in a nutshell.

Here’s a quote from our foreword, which seems to describe it aptly:

Karoo Roads is a whisper from the past, a drink at a backyard bar in the middle of nowhere, an adventure with an ostrich, a night under the stars, a song in a village church hall, a round of golf with a Rastaman, a ghost in the fireplace, a battle with a blizzard and a walk in the veld with a wise old jackal hunter.

It is also a collection of some of our favourite Karoo stories, gathered over 20 years of rambling on dirt roads and forgotten highways, in snow and sunshine, on days that were good and bad but always memorable.

Many of the characters in them, like Matjiesfontein’s David Rawdon, Outa Lappies of Prince Albert, Group Captain ‘Dutch’ Hugo of Pampoenpoort, Alfie Wewege of Port Nolloth and a slew of old-time steam train drivers from De Aar, have since passed on. But, in these pages, they live and breathe.

How long did you work on the book and what was the best part of putting it together?

Karoo Roads has been 20 years in the making. We have a treasure chest of more than 300 narrative pieces that we choose from, occasionally expand, edit, update or simply preserve in amber as a one-off special experience.

Imagine you’re in a story kitchen with your editor’s apron on. Around you are 300 ingredients, in the form of published stories (some from Country Life, others from elsewhere), extensive travel journals (impeccably compiled by Julienne) and hundreds of thousands of images. Also old Karoo books. Lots of them, from all over the heartland, in the form of heavy tomes, light family histories, travel books and cook books.

Now you’re preparing a 25-course story meal: a bit of history, a touch of humour, a sprig of sadness, a dash of human interest, a dollop of road trip, a cup of heritage, a splash of festival, a slice of adventure and a big long glass of in-depth research. Add a ghost story, for pudding.

Since when has ‘Karoo Roads’ been available and what response have you had?

In August we said: “The book will come out in e-book format, and if you want a printed copy, then we need at least 500 orders to press the print button.”

Within three weeks we received more than 600 orders. This is the first time we have pre-sold an unborn book – normally we make a book, print it at our own expense and hope like hell it sells.

Those orders allowed us to print up 3,000 copies. They arrived in mid-November and they are now flying to all corners of the Earth.

Would you like to single out one or two of the stories?

The most poignant experience was working with the Gift of the Givers over the past few years when they deliver water, feed and food to outpost communities hit by this killer drought. We’ve grown to know and deeply respect those guys, and it was a great honour to be able to include a chapter on their work here.

One of the funniest encounters is told in the Aberdeen Nights chapter. And one of the most valuable is a series of interviews with the retired old steam train drivers who came to settle in De Aar in the mid-1980s. In this book, they live again.

What’s next for the Karoo Space team?

We are working on Karoo Roads II, which will be available in September 2021. For the rest, it’s the freelance hustle, telling the stories of the Karoo to whoever wants to pay us and listen.

Where is ‘Karoo Roads’ available?

We own and run karoospace.co.za  and it’s full of Karoo items of interest. It also has a print bookshop and an e-bookshop, where both formats of all our books can be ordered. Karoo Roads can also be ordered directly from us by emailing julie@karoospace.co.za.

WATCH: Man who was dragged by his private parts speaks out