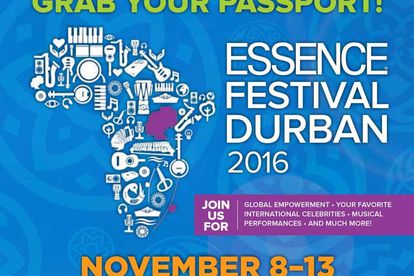 Durban is slowly becoming the capital of LITness, look at all the prestigious ceremonies, from the SAMAs to Durban Julys that are being held there.

Now, the province is set to host one of the biggest international events we’ve seen yet.

The Essence Festival is coming to the ‘Motherland’ y’all!

This announcement is on the heels of the New Orleans festival which took place from the fourth to the eighth of July.

For those of you who are snoozers on such news, this festival features a plethora of the world’s best recording artists some with over 20 years’ experience in the industry.

The New Orleans leg featured some of South African artists such as Zakes Bantwini, Lelo Green, Zulu Nation dancers and others.

I believe these artists held it down to the point where internationals are dripping in anticipation for the show in the homeland.

The Essence Durban fest dubbed “a sister festival” to New Orleans will not only showcase international performers but also world-famous speakers, local artists and experts.

In addition to that it aims to ‘pump up’ small businesses through empowerment seminars, career-guidance workshops and other programming.

Essence President, Michelle Ebanks they are thrilled to present these sister festivals in the same year of 2016.

“As Essence converges on Durban during South Africa’s beautiful summer season, we are creating a week-long experience that will inspire women globally and convene our communities across the diaspora” said Ebanks in a statement.

Naturally, the eThekwini Municipality Mayor James Nxumalo couldn’t be happier, saying the City of Durban is ready for ‘its global close-up, continuing on its international surge’.

“This partnership will have a host of benefits for residents, starting with the Durban Business Fair program, which strives to connect local businesses globally,” he says.

He concluded that there’s no doubts that through the Festival jobs will be created and our cultural economy improved.

All I am saying is, I am ready, how about you?