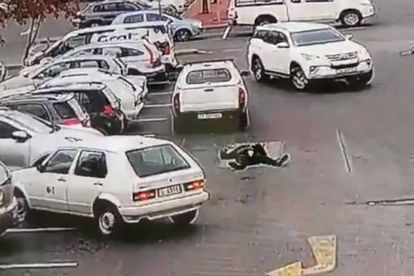 Graphic Warning: This video of a security guard getting run-down at a Stellenbosch Spar does indeed contain some very distressing scenes – viewer discretion is advised.

Social media has been left up-in-arms by a viral video doing the rounds on Monday evening, as a security guard was mowed down by an infuriated driver who couldn’t navigate the one-way system in the Stellenbosch Spar’s car-park, leading to a particularly brutal case of road rage.

The shocking footage has been viewed thousands of times, with onlookers demanding that the violent motorist is found and brought to justice. Concerns were also raised about the man who felt the full force of the vehicle drive over the top of him. But if it’s possible for a story like this to have a silver lining, we think we’ve got it…

We contacted the Die Boord Spar to get to the bottom of this issue. A spokesperson remained tight-lipped about the identity of the driver – and the circumstances leading to this incident of road rage – but he did confirm to us that the guard only suffered “minor injuries”. In fact, he’s even back at work next week.

He was discharged from a Stellenbosch hospital on the same day as the incident, too. At least the staff at the Spar know they’ve got one of the toughest guys in the country manning their car-parks – if a car can’t finish him, no petty thug or have-a-go hooligan stands a chance.

What sparked the road rage?

In the video, we see the offending white vehicle pull into a vacant space. All seems well and good at first, but when the driver is ready to leave after a timelapse in the clip, we see that they want to go out the way they came in – despite glaring yellow arrows telling him this won’t be possible.

The security guard – who has not yet been named – then attempts to help the person behind the wheel grasp a very simple instruction. However, the driver decides to plough through Spar’s hardest employee instead, speeding away from the scene of his hit-and-run.

It still hasn’t been revealed what has happened with the motorist, but Spar confirmed to us that they would be issuing a statement on the issue at some point over the next couple of days.

In what is such a shocking video, things could have ended much, much worse for this heroic guard – he returns to work on Tuesday 14 May: We reckon he should have a chat with someone about increasing his “danger pay”.

GRAPHIC: Watch the Stellenbosch Spar security get run over here:

Guys, this happened at Spar in Die Boord and I am fucking traumatised!!! I seriously hope someone wrote down the reg number and this driver is arrested! ?? pic.twitter.com/eDBCCJd7Ya