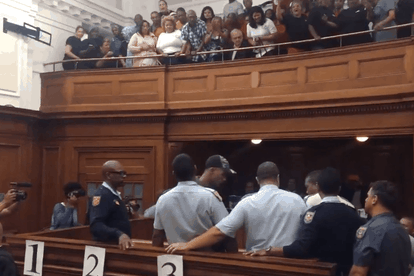 Justice has been served for Hannah Cornelius and her family. No life sentence or act of lawful process can atone for the horrendous death she suffered, but the men guilty of this crime are off our streets for a very long time.

Eben van Niekerk, Geraldo Parsons and Vernon Witbooi will all serve multiple life sentences in prison for this heinous crime. Nashville Julius, a fourth accused, was found guilty of kidnapping and robbery and was sentenced to 15 years.

The trial had taken a fair few twists and turns, but never really did much to put a strong conviction in any doubt. The murderers failed to show any true remorse, according to Judge Reshine Allie.

How the murderers were convicted

The evidence against the quarter stacked up quickly. DNA, forensic tests and eyewitness accounts formed the basis of a very strong prosecution. We even saw the dramatic moment that Geraldo Parsons’ tattoo collection was revealed to the court.

His ink included some offensively-graphic works, including the outline of a decapitated, naked female. Elsewhere, Eben van Niekerk showed his ruthless side by attempting to retract his apology letter.

The prosecution presented a letter that he penned after being arrested in May 2017. In the message, he says he’s sorry for what he did and asks for forgiveness, before pleading with Hannah’s parents: “Don’t be angry at me, please.” However, he since said he did this with “no sincerity”, but rather, hoping it would help his case.

It was this callous, chilling lack of remorse that threatened to turn this case into a macabre pantomime. Thankfully, the theatrics had no bearing on the judge’s verdict. In fact, once she handed down the plethora of life sentences, that’s when the crowd in the gallery made their voices count.

After the murderers were sent down for life, friends, relatives and supporters of Hannah Cornelius gave them a hostile send-off as they were lead away. This is what it meant to the public, who were seeking closure at the end of a traumatic ordeal:

“Tjank! Cry!” members of the gallery shout as the sentenced attackers are lef back to the holding cells. #HannahCornelius @TeamNews24 pic.twitter.com/VK5hSoYMB0