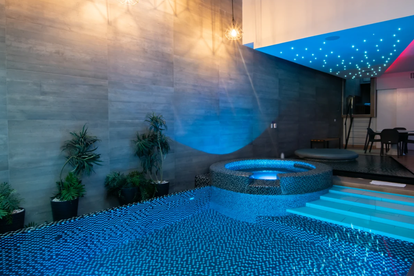 A pool villa at one of Mexico’s love hotels. Image: Supplied

A pool villa at one of Mexico’s love hotels. Image: Supplied

The boom in boutique hotel accommodation in Mexico City has led to an increase in the number of high-end love hotels which — although not exclusively — cater to the needs of couples looking for something different.

WHAT IS A LOVE HOTEL?

Love hotels originated in Osaka, Japan, in the 1960s as a place where couples could sneak off for a rendezvous with their partners. These types of establishments still often hold a reputation as being sleazy joints where people only meet to satisfy their physical needs.

Kinky Hotels’ Iribe says it is sometimes difficult to differentiate between a normal hotel and a love hotel, given that love hotels are an ill-defined category.

LOVE HOTELS: NOT SLEAZY OR SORDID

Iribe has put together a catalogue of hotels for couples seeking something special or different. Her guide — hoteleskinky.com — lists 100 establishments that she recommends. Seedy establishments do not make their way onto her listing.

Safe guide caters to ‘all sorts of interest’

The most expensive suites cost around €290 (R4 930) a night. These rooms are not stuffy as shoeboxes but are spacious, at around 200 square metres in size.  Many come with private pools, jacuzzis, saunas and more.

Today, “whoever wants to own a love hotel must invest in the architecture and decor of the building,” Iribe says.

MEXICO: HIGHEST NUMBER OF LOVE HOTELS IN THE WORLD

Iribe states that Japanese love hotels “can’t hold a candle to Mexico’s”, as they are generally tiny, and “don’t have swimming pools or the same level of glamour”.

Iribe says that “Mexico City has the highest number of love hotels in the world,” although this statement is based on her own research.

According to a manager at one of Mexico’s love hotel chains, “love hotels emerged [in Mexico] 10 years ago”, coinciding with the boom in “boutique hotels servicing the tourism sector”.

Before then, Mexico City mainly had meeting spots for lusting couples, but they were synonymous with the unsavory types of establishments one would associate with hotels that rent rooms by the hour.

IT’S NOT ALL LOVING AT LOVE HOTELS

Even though Mexico City is a love hotel hotspot, the industry is still largely stigmatised in the eyes of the general public.

“The sector has been historically marginalised. People think, ‘Oh, I don’t want to go to a place where people made love’. As if the people who stay in regular hotels don’t have sex there,” says Iribe.

The manager at one of Mexico’s love hotels says that a range of customers use the hotel’s rooms for purposes other than lust.

“Although we can’t know what goes on inside the rooms, we have been seeing more and more groups renting the rooms with pools to have a good time, cool off and drink with their friends,” says a hotel manager from the Picasso Motel chain.

Besides having a private swimming pool and a jacuzzi, their most expensive suite includes a bar, a pool table, a DJ area and a lounge, and can host up to 20 people.

While they are often more luxurious than other hotels, love hotel rooms are usually cheaper than regular tourist hotels – sometimes by up to 70%, says Iribe.

Iribe said she knows people who choose these types of hotels for luxurious getaways from their ordinary lives.

“Recently, an acquaintance who has just become a mother, told me that seven days after giving birth, she left her baby with her in-laws and went to a love hotel with her husband,” says Iribe.

“There, she did what she hadn’t done in days – sleep for six hours straight!”