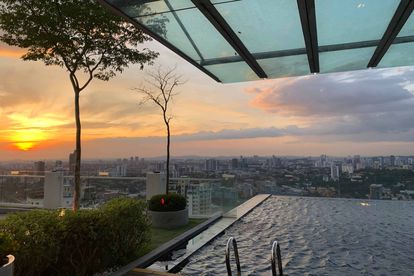 With both the typical Asian eclectic mix of bargain markets, hawkers and street stalls, and glamorous malls and Michelin-star restaurants, Kuala Lumpur moulds itself into the shape that each individual traveller desires.

Why visiting Malaysia’s capital is a good idea

The primary concern when planning future travels is the risk of COVID-19 exposure. At the time of writing, Malaysia’s official number of COVID-19 cases were just over 9000 — a noteworthy feat given that most other popular exotic Asian countries, including Japan and Indonesia, are currently struggling to contain sharp infection spikes.

Besides its already-existent travel allure, the country’s efficient and effective containment of the virus enlists Malaysia as one of the top, low-risk Asian destinations to consider visiting after border re-openings.

The Batu Cave complex is an well-known Malaysian attraction and home to a towering 42.7-metre golden statue of the Hindu God Lord Muruga, which is perched at the foot of 272 colourful steps.

After ascending the stairs, one may enter the dazzling cavernous depths of this Hindu temple and enjoy the serenity of the limestone interiors, dotted with deity statues. The caves also play host to one of the world’s largest Hindu festivals — the Thaipusam Festival, which occurs annually in either January or February.

Although no longer the tallest buildings (having been surpassed in 2004), the Petronas Towers are still an impressive architectural triumph to behold, especially during the evenings, when their lit-up frames mark the sky.

The Towers are home to one of Malaysia’s most elite shopping malls, boasting designer and upmarket stores, as well as an aquarium and art gallery. It is possible to go right up to the observation deck on the 86th floor to soak up the city views, and to visit the sky bridge on the 41st floor.

Malaysia is home to one of the largest Chinese communities outside of China, which makes it entirely possible to indulge in authentic Chinese food and to appreciate real Chinese temples and architecture.

Chinatown, specifically, Petaling Street (an undercover market area) is a bustling hub and favourite amongst tourists, sporting countless street vendors and stalls offering a wide range of items and souvenirs.

Brickfields, or “Little India”, much like Chinatown, represents a portion of the diverse Malaysian population, and is able to stay true to its promises of encompassing an Indian experience.

Shops, with the smell of incense floating out and Bollywood music blaring, offer ethnic Indian clothes and trinkets, and a wide range of Indian buffets line the street. The area itself is incredibly colourful and alive, with strong Indian architectural influences present in the surrounding buildings.

Also offering street-life and magnificently maintained parks, it’s no wonder Kuala Lampur has made its mark on the map over the last few years as a South East Asian must-do.

A visit to Malaysia promises to not only allow you to immerse yourself in the complex richness of Malay food and culture, but also those of Chinese and Indian communities. Don’t forget to book a hotel with an infinity pool, a popular offering in the city, so that you can bask in soothing waters while overlooking the brilliant skyline.