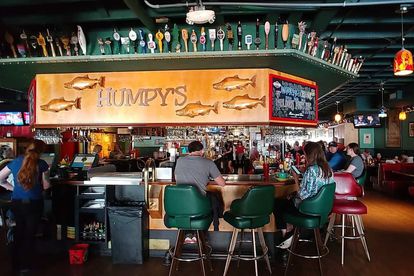 A few days after arriving I realised that Anchorage, sited between mountains and an inlet, surrounded by National Parks and filled with Alaskan wildlife, combines some of the best attractions of Alaska with the hospitality and intrigue of a Last Frontier.

Anchorage is almost equidistant from New York City, Frankfurt Germany, and Tokyo Japan. For this reason, Anchrage’s Ted Stevens International Airport was once a major stop-over point for international passenger flights and it is still the world’s third busiest airport for cargo traffic. You hear aircraft landing and taking off throughout the day and night.

Captain James Cook sailed past the site in 1779 and gold prospectors discovered the bounty of Ship Creek in the late 1800s but it wasn’t until the Alaska Railroad set up a construction camp in 1915 that Anchorage was established and became a booming tent city of 2,000 people. Now the population is around 300,000 and the city is a great place to visit.

Alaska is an outdoors place and the Alaska Public Lands Information Centre in Anchorage is the perfect place to start an exploration of Alaska parks.

You can see whales, otters and other marine animals in the glacier-filled Kenai Fjords National Park. North America’s tallest peak is the most obvious attraction in Denali National Park where you can see caribou, brown and black bears, wolves, moose and fox.

Floatplanes take off from Anchorage’s Lake Hood for day tours to the best spots for bear viewing, hiking or fishing in Lake Clark National Park. You can drive to Katmai National Park where during July to September you are likely to see a brown bear catching a jumping salmon in mid-air. Mighty Wrangell-Saint Elias is the largest national park in the USA and it has glaciers and old Kennecott, which is a well-preserved example of a mining boomtown.

But there is more. The Chugach Mountains create a dramatic skyline for Anchorage and Chugach State Park and Chugach National Forest are a playground for outdoor enthusiasts. Some of the best trailheads and access points are just 20 minutes from downtown.

The most frequently climbed mountain, most popular trailheads and 60 of the state’s most accessible glaciers are all found in the Chugach together with rafting, biking, kayaking and fishing opportunities. The 60-passenger Alyeska Aerial Tram offers expansive views and at the top there are two restaurants, a museum, and guided walks in summer.

The downtown area of the city has some attractions. Alaska’s largest museum, the Anchorage Museum tells the story of Alaska and the North. It is a multifaceted story that weaves together social, political, cultural, scientific, historic and artistic threads.

Information about the native people, can be found at the Alaskan Native Heritage Centre in suburban Anchorage. This shares the heritage of Alaska’s 11 major cultures. Visitors experience Alaska Native cultures first-hand through stories, dance and more but unfortunately it seems most visitors don’t make it here.

The Lake Hood Seaplane Base is the largest seaplane base in the world and most visitors to Anchorage enjoy the spectacle of planes leaving and arriving on the water. As it is only five kilometres from the downtown centre it is easy to reach. Taking a trip on a Flightseeing flight is one of the best ways to explore the mountains, soar over glaciers, and spot wildlife.

The Alaska Aviation Heritage Museum is on the lake and serves as a tribute to Alaska’s famous bush pilots. It is home to 25 planes along with historic photos and displays.

Alaska Botanical Garden is a colourful showcase for native species, with paths through groomed herb, rock and perennial gardens in a wooded setting. The mile-long Lowenfels Family Nature Trail will teach you about native Alaska plants.

A railway first linked broad stretches of Alaska together and trains depart daily in the summer for Seward, Prince William Sound, Denali, Talkeetna and Fairbanks. The Glacier Discovery train to Spencer Whistle stop is an easy and fascinating day trip from Anchorage.

Active from September through April, the famous Northern Lights are amazing to see and night owls can enjoy the shifting colours of the auroras near Anchorage. At this time, the city transforms into a white playground, with 130 kilometres of maintained Nordic ski trails. You can go dog sledding, ice skating, and snowmobiling, and see ice sculptures and more.

There are more than a thousand moose in Anchorage and they are not difficult to find. Spend a little time in the city’s many green spaces, and you’re likely to see one. You may also stumble upon one of the bears that periodically inhabit these areas. For those seeking a truly iconic wildlife shot, a visit to the Alaska Wildlife Conservation Centre puts moose, musk oxen, foxes, eagles and many other species in camera range.

Seafood is big here so local restaurants includes king crab, halibut and salmon on their menus while street stalls sell reindeer sausages. Beer lovers are catered for with more than a dozen breweries in the city.

Alaska is part of the USA so visitor requirements are the same as the mainland. Most air routes require two stops from Johannesburg to Anchorage.