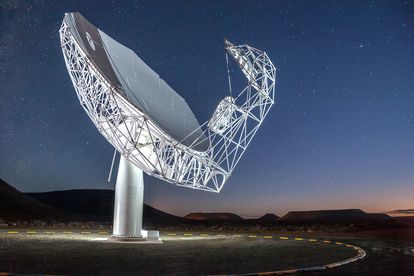 Great news for stargazers the world over: A group of twenty new galaxies has been discovered by the MeerKAT Telescope, based in the Northern Cape. The powerful instrument, which has been at the forefront of interstellar research in South Africa for years, has managed to spot something that other ocular technologies were unable to.

The MeerKAT telescope is able to detect the faintest of all radiowaves. So when the telescope set its focus for this previously-explored region of the sky, something completely new showed up through their lenses. The gas-rich galaxies contain high amounts of hydrogen, giving off a red hue that ‘engulfs’ this exciting new group.

“A group of 20 galaxies has been discovered with South Africa’s MeerKAT Telescope, likely the most neutral hydrogen gas-rich group ever discovered, and it’s the first time this group has been identified, despite residing in a very well-studied area of the sky. The diffuse red structure is the neutral hydrogen gas, which envelops both galaxies.“

“This indicates that they are in the process of merging. Most star-forming galaxies are embedded within a cloud of cold neutral hydrogen gas, which acts as the raw fuel from which stars can eventually form. This gas is extremely faint, and can only be detected in radio wavelengths.” | Khulu Phasiwe, Head of Comms at the SARAO

A group of 20 galaxies has been discovered with South Africa’s MeerKAT telescope, likely the most neutral hydrogen gas-rich group ever discovered, and it's the first time this group has been identified, despite residing in a very well-studied area of the sky. pic.twitter.com/PXe66JS8Nr

A statement issued by SARAO captures the magnitude of their ground-breaking (or should that be sky-shattering?) discovery: What they’ve found here is likely to help researchers better understand the fundamental building blocks of how new galaxies form. And this was all achieved right here in South Africa. You love to see it…

“By observing this hydrogen gas, astronomers are able to understand the evolutionary processes that take place in galaxies. The majority of galaxies in the Universe reside in groups. However, it is rare to detect a group with such a large number of group members with so much neutral hydrogen.”

“This suggests that the group is still in the process of assembly, as it has not undergone evolutionary processes that would remove this gas from the galaxies. This discovery is not only important per se, but will set new grounds for the understanding of how galaxies are actually assembled into groups in the first place.”