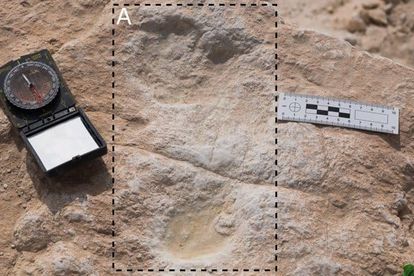 The discovery on human footprints dating back around 120 000 years ago in what is now northern Saudi Arabia is exciting the international science community.

Of particular interest is that it indicates one of the routes early humans used to expand out of Africa, and ultimately populate the world, was through the interior of the Middle East, and not only the coastal migration routes hypothesised by most researchers.

The prints also indicate that Homo sapiens – our species – were moving out of Africa much earlier than 60 000 years ago, which is the timeframe that genetic studies have indicated modern man arrived in Europe.

The finding could be further evidence that there were multiple migrations out of Africa, something that is supported by previous discoveries of an 88 000-year-old human fingerbone in Arabia, a 180 000-year-old jawbone in Israel and an incomplete human skull found in Greece that dates back 200 000 years.

The recent discovery of the seven human footprints in what would once have been a lake is detailed in the publication of an academic paper in the journal, Science Advances, on Thursday.

In the paper, an international team of researchers detail how they found the footprints in an ancient lake deposit in the Nefund Desert. Dating of sediment above and below the prints indicates that they are between 112 000 and 121 000 years old.

In total, seven out of the hundreds of prints discovered were identified as hominin, including four that, given their similar orientation, distances from one another and differences in size, were interpreted as two or three individuals travelling together.

An absence of stone tools or butchered animals tells the researchers that the area was not a permanent settlement for early humans, but that the group travelling through the area on their way to an unknown destination.

The scientists also discovered many animal prints there – including camels and a large elephant that became extinct thousands of years ago. So, apart from getting water from the lake, this seemingly small band of travellers may also have hunted some of the animals for food before moving on.

Arabia was at that time lush and very fertile

While northern Saudi Arabia is arid and inhospitable today and would not have made for a convenient travel route out of Africa, it was not so 120 000 years ago.

“At the time that humans were moving through this landscape, the area wouldn’t have been hyper-arid,” said Richard Clark-Wilson, a co-author of the research from Royal Holloway, University of London.

Instead, it would have been a grassy savannah with bodies of water, offering opportunities for human migration. “Human movements and animal movements tend to be linked to fresh water availability,” he said.