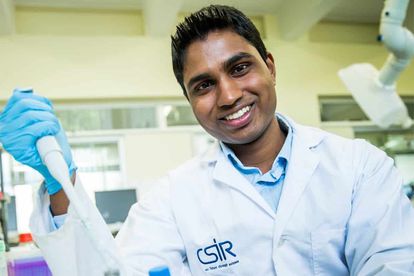 The CSIR says rural based SMME’s are getting affordable internet support. Image:CSIR

The CSIR says rural based SMME’s are getting affordable internet support. Image:CSIR

The Council for Scientific and Industrial Research (CSIR) reached a significant milestone in October, marking 75 years of existence, with the CEO saying “we have developed a new strategy to specifically address industrial development, along with our aim of supporting a capable state.”

Dr Thulani Dlamini added that the anniversary is not only for celebrating, but also engaging deeper with the CSIR’s vision as a leading scientific and technology research organisation.

“Our new strategy will create a science council that plays a more visible role in industrial development, underpinned by a strong scientific and innovation capability. The strategy focuses on getting our scientists, engineers and technicians to work more closely with private sector companies in their innovation efforts, and it is upheld by the four pillars of growth, sustainability, impact and relevance.”

Establish in 1945, the CSIR’s mandate is to improve the quality of life of South Africans through multi-disciplinary research, development and innovation.

Some of the more historic CSIR innovations and inventions include the first radar in South Africa (1945), the first microwave electronic distance measurement equipment, the tellurometer (1954), as well as the contribution of CSIR research to the invention of the lithium-ion battery in the 1980s.

Another noteworthy innovation is the Heavy Vehicle Simulator that determines the effects of 20 years of traffic in a three-month period, and this has earned more than R200 million in foreign revenue for South Africa.

Elsewhere, the CSIR’s wind tunnels continue to be used in aerodynamic design tests and studies for local and international entities in the aeronautical sector.

This dedication to science and innovation has also led to the establishment of a number of institutions and science councils, such as the South African Bureau of Standards (SABS), the National Research Foundation, the National Metrology Institute of South Africa and the Human Sciences Research Council (HSRC).

The CSIR has also assisted well over a hundred companies with the necessary licensing and helped with the formation of 54 start-up companies from 1990 to 2014.

Impact is far and wide

In line with its multidisciplinary nature, the CSIR pointed to the impact it has made in many fields.

In 2010, the organisation unveiled its state-of-the-art containment Level 3 laboratory for experiments involving HIV and TB pathogens, which enables researchers to conduct research and proof-of-concept studies for new HIV/Aids and TB diagnostics or therapeutics.

More recently, said the Chairman of the CSIR board, professor Thokozani Majozi, “We collaborated with a number of local partners to produce local ventilators that have been rolled out nationwide to patients showing respiratory distress in the early phase of Covid-19 infection. To date, 7 000 ventilators have been completed and delivered to hospitals and clinics.”

Over 18 000 Covid-19 tests have been conducted at an upgraded CSIR Biosafety Level 3 laboratory in a bid to boost the country’s testing capacity, in partnership with the National Health Laboratory Service.

Work is also underway to manufacture South Africa’s own Covid-19 sample purification kits in large quantities, creating a steady local supply that will speed up testing and reduce the country’s reliance on international suppliers amid heightened global demand.

The work is being funded by the Department of Science and Innovation, the South African Medical Research Council and the Technology Innovation Agency.

State of the art infrastructure

At the CSIR main campus is a 3D printer for titanium parts.

“Titanium is the metal of the future, so we have a 3D printer for titanium, arguably the largest of its kind, globally.”

In 2016, the CSIR launched its Biomanufacturing Industry Development Centre (BIDC) at its main campus in Pretoria.

The BIDC allows for commercial business to test their technologies at a conceptual level, as well as providing assistance to the point where the product is market ready.

The CSIR said it is focussed on building resilient defence and security capabilities to strengthen national security technology capacity.

The defence and security portfolios are quite lengthy, but the CSIR said they are developing a synthetic aperture radar that is going to be used for both military and civilian applications and that they are hoping to commercialize this technology in the next 12 months.

In protection of wildlife and militarisation of radar, although the technologies are not new, progress and development is taking place with Reutech. This radar technology has use cases in the protection of infrastructure and environmental assets like the rhino.

The CSIR also referenced a radar that is being developed with a ten-kilometre radius that can keep a 24-hour watch over farms at risk of attack.

Majozi said the CSIR is entering the “fourth phase of evolution.”

From 1945 to 1988, the CSIR was focussed on addressing SA’s technological problems. From 1988 to 2006, the focus shifted to a more market-orientated approach to support industrial development. From 2006 to 2019, following an extended period with a strong focus on industrial development, a stronger emphasis on research was introduced.

CSIR CEO Dlamini chimed in: “More than ever, our country needs technological innovation for socioeconomic development, which is the only way to improve the lives of the people of South Africa. We have sharpened our focus to achieve this.”

Dlamini added, “As part of the celebrations, we will host our 7th Biennial CSIR Conference on 11 and 12 November. Not only will we be sharing some of our exciting and impactful work, but we will also debate and discuss some of the challenges that technological innovation can help address with industry and government stakeholders. The virtual event will comprise a series of online events, including webinars, virtual tours, demonstrations and exhibitions.”