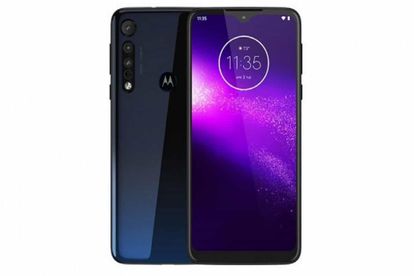 The Motorola company is on the roll with its “One” mid-range series of smartphones. The brand released the One Zoom and One Action but it appears there’s a third one in the range.

Motorola completely removed any trace of the phone’s existence off their company’s servers. However, information about it was still available through Google’s web cache service for a period of time.

No specifications could be found but on the specifications list but the “Highlights” panel revealed some juicy titbits. The new smartphone device features:

Leaked images of the phone’s rear cameras revealed that there were five circles in the camera bay at the back. Three sensors and the phone’s LED flash is listed but no information is available about the second port from the bottom.

“’Supposedly, we’re looking out for capabilities that will let users take super-sharp photos from right up close to a subject — maybe something less than about 18′ as that’s the minimum focus distance for most smartphones. Suffice to say, that’s not a common feature you’d see in a mid-range device.”

The smartphone’s price and available colours

Based on the leaked images, the Motorola One Macro appears to have a laser-assisted autofocus and a rear fingerprint scanner. It also has a notched display with a tall aspect ratio.

People who are keen on purchasing the phone will be pleased to find out that it has been advertised for around $240 or around R3,600. So far, what is known is that the phone will come in a blue or purple hue.

At the moment, no further information is available on when Motorola plans to launch the device. The phone company is also playing their cards quite close on which regions the smartphone will come out in.

However, rumours circulating say the device is expected for release in the Middle East and India.

Black lace to shower hour: Miley Cyrus bares it ALL for ‘Flowers’.

City of Cape Town mum on load shedding for the week: Fear the worst!

Kamvelihle Bikitsha plays the third wife in ‘Gqeberha: The Empire’