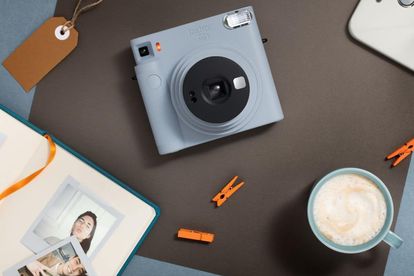 Fujifilm South Africa recently announced the launch of the Instax SquareSQ1 instant camera. It’s an easy-to-use addition if you love square film. Some of the features include Automatic Exposure and One-Touch Selfie Mode.

Here’s what you need to know

This new Square addition to the Instax range “combines everything that fans love about the mini’s cool, modern style and functionality, with the larger, vibrant output of square film”.

It’s the perfect travel companion, especially if you don’t want to carry a bulky camera around. Simply aim, shoot and print, the Instax Square SQ1 handles it all, effortlessly. Why squares, I hear you ask?

“The square prints the camera produces are mirrored by the square nature of not only the body but also the viewfinder, lens glass and the selfie-mirror on the front of the device.”

Fujifilm designed the Square SQ1 to be as compact as possible by positioning the lens to extend outwards from the camera body. It has no LCD screen and relies on the optical viewfinder to compose images.

Simply aim, press the shutter button and the film will automatically feed at the slot at the top of the camera. It will take approximately one and a half minute for the film to develop

The Instax SQUARE SQ1 is powered by two CR2/DL CR2 lithium batteries (included) which will last in the region of a substantial 30 Instax SQUARE 10-pack film packs.

You’d be able to get your hands on the Instax Square SQ1 from mid-October when it lands in South Africa. It will be available in the three aforementioned colours. A suggested SA retail price has not yet been confirmed.

However, the European suggested retail price will be €129,99, which works out to approximately R2 400. The Instax Square SQ1 camera will be sold alongside a range of new accessories.

You might think that your life is too boring for an Instax Square SQ1, but I’m here to tell you that it’s not. You need those Instagram-worthy snaps, after all. Still not convinced? The Verge sums it up:

“It is also this consistent look and ease of use that, for me, makes an Instax camera an Instax camera, and to see Fujifilm moving the design back to basics with no screens and limited options is oddly a breath of fresh air”.