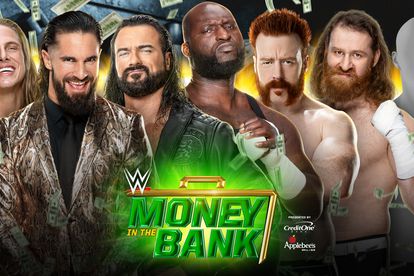 As the wrestling world prepares to see another night of electrifying entertainment at this weekend’s 13th edition of the WWE’s Money in the Bank, fans are anticipating a major night of wrestling!

The ladder-ridden main event has grown leaps and bounds, since its debut back in 2005.

Those who walk away with the Money in the Bank title, do so with the coveted golden briefcase that holds a life-changing career opportunity at a World Championship, if cashed in within a 12-month period from the time of winning the contract at Money in the Bank.

What makes this a special opportunity is that the victor may cash-in on their shot at gold anywhere and at any time.

WWE fans will remember Edge famously cashing in on a blood-soaked John Cena – who would have thought his night was done after defending his crown against five leading contenders inside the Elimination Chamber – back in 2006.

Edge’s cash-in proved to be historic, giving him his very first heavyweight title.

Bliss May go down as one of the smartest holders of the Money in the Bank briefcase – seizing her moment at just the right time, to elevate her to greater heights.

These are just a few examples of how transformative the Money in the Bank night can be and why it promises to enthral because it is a main event that just simply gets better and better with each year.

This year, Money in the Bank will feature four championship matches, with Theory taking on Bobby Lashley for the United States Championship, whilst Ronda Rousey and Natalya will push each other to the limits for the SmackDown Women’s crown. The Usos and The Street Profits will bring their high-flying moves as they go head-to-head to be crowned the Undisputed tag team kings of the WWE.

All of these will serve as the perfect prequel to the main event Women and Men’s Money in the Bank ladder matches which will feature a staggering Sixteen of the most elite superstars in WWE. Eight ladies will go head-to-head soon followed by eight gents; all vying for the top step that will see them edge the rest of the field for a shot at a WWE title.

The question that remains to be answered; who will rise above the rest of the competition to seize their golden opportunity at this career-shaping main event.

Whatever happens this coming weekend, you do not want to miss the action at Money in the Bank.

Seth “Freakin” Rollins, Bianca Belair, Bobby Lashley, The Usos, Drew McIntyre, Becky Lynch, Asuka and others will lace up their boots for an unforgettable evening of clashes between the WWE Superstars and you can watch it all unfold on Sunday 3 July on SuperSport from 02:00 CAT with repeats at 19:00 CAT same day.

Money in the Bank will also be available on DStv Catchup for subscribers.