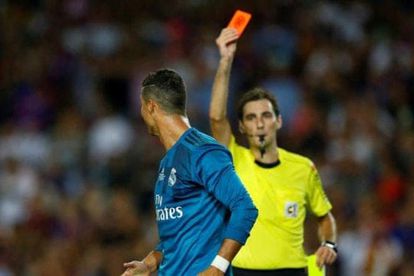 Cristiano Ronaldo has been banned for five games after he got into an altercation with the referee, De Burgos Bengoetxea, during Real Madrid’s 3-1 victory over Barcelona in the Super Cup.

It capped a ferociously eventful cameo for Ronaldo, whose second-half introduction from the bench saw him score a sublime individual goal and pick up two bookings, the second of which lead to ‘the shove’.

Though the contact is minimal, it is the lack of respect and sheer petulance that has made a villain out of CR7. His first yellow card came after his goal, where he mimicked a Lionel Messi celebration from an El Classico at the end of last season.

Messi held his shirt aloft to the Real Madrid fans inside the Bernabeu, whereas Ronaldo returned the favour inside Barca’s Nou Camp last night.

How long will Ronaldo be banned for?

Ronaldo’s second yellow and subsequent sending off came when he was muscled out of a challenge by the Catalan’s defender Samuel Umtiti. Referee Bengoetxea felt he had dived, and gave him his marching orders.

Early reports suggested that Los Blancos could be without their superstar for up to TWELVE matches following his ‘violent attitude’ towards the Basque official. On Tuesday afternoon, however, it was confirmed that Ronaldo will serve a five game ban.

With the five game ban now confirmed, it means that he will miss the games against Deportivo La Coruna, Valencia, Levante, Real Sociedad and Real Betis.

Real Madrid captain Sergio Ramos insisted that his team mate did not dive, and expects the decision to be appealed by the club. Manager Zinedene Zidane claimed the decision ‘went too far’, whereas full-back Marcelo said the second booking was ‘bizarre’.

The second leg of the Super Cup will be held at the Bernabeu on Wednesday, as Barca travel to Madrid needing to overturn a two-goal deficit.

Ronaldo will be cleared to play if Real appeal the decision, with any potential ban coming into place after his case has been heard.

You can see the incident here: Do you think Ronaldo deserves to miss five games for this?

What is Mamelodi Sundowns’ 24-hour rule?

US woman visiting South Africa is MISSING – Have you seen Sherry Waite?

Uganda’s education in jeopardy as the country tackles Ebola