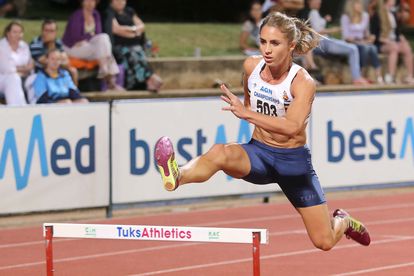 Wenda Nel became the third South African female athlete to qualify for the Tokyo Olympics when she won the 400m hurdles in Potchefstroom.

Wenda Nel became the third South African female athlete to qualify for the Tokyo Olympics when she won the 400m hurdles in Potchefstroom.

Wenda Nel became the third South African female athlete to qualify for the Tokyo Olympics when she won the 400m hurdles in Potchefstroom in a time of 55.16.

In doing so, Nel proved she is a ‘fighter’ in the true sense. The past three years had not been easy. She was diagnosed with Covid-19 last year. Her frustrations, however, started in 2018.

Up to her bronze medal performance at the Gold Coast Commonwealth Games, the Tuks athlete seemingly could do no wrong. Nel was from 2014 to 2018 consistently one of the top 20-hurdlers in the world. In 2015 as well as 2018, she was one of the ten fastest hurdlers. A definite highlight was her fifth-place finish at the 2015 World Championships. The same year she improved her personal best time to 54.37.

It was the ‘WOW’ moment of her career.

Wenda Nel admitted being mentally caught off guard when she medalled at the 2018 Commonwealth. Try as she may, afterwards, she could not dip under 55 seconds again. To worsen matters, she started having injury woes. It got progressively worse. Amid the 2019 season, she stopped running. It felt to her like she was getting slower with each race. Her confidence was waning.

In light of this, she considers 2020 sort of as a blessing in disguise despite contracting Covid. For the first time, she had proper time to recover.

‘Equally important was that I had time to think about what happened over the last three years. It made me realise that nothing lasts forever. I can’t run forever. There comes a time when you need to quit. I don’t know when that is going to be. That is why I must make the most of every moment and enjoy while I am doing so. Long story short, I got my passion back.’

According to Wenda Nel, it was sort of an anticlimax when she ran the 55.16 last week. Her winning time is, for now, the third fastest in the world.

‘When I crossed the line and realised what I had achieved, I was excited. I wanted to share that moment, but there were no spectators. There was not even a stadium announcer.

‘What excites me is that I know I am capable of being faster. I did make mistakes during my race. Who knows what can happen once my execution is near perfect.’

Nel is not sure when she will be competing internationally.

‘Someone said to me, the challenge is to make sure that you ready to board when the “bus stops”. I definitely don’t want to miss it. Everything I do is geared to be ready when there is an opportunity to compete internationally.’

Gerda Steyn and Irvette van Zyl (both marathon) are the other two female athletes who had qualified for the Tokyo Games.