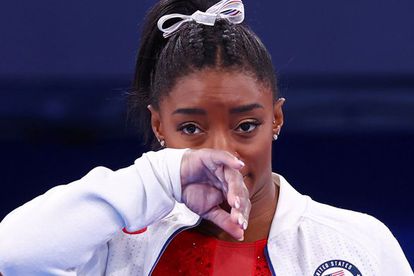 Simone Biles’ aunt “unexpectedly” passed away while the gymnastics superstar was competing at the Tokyo Olympics.

Simone Biles’ aunt “unexpectedly” passed away while the gymnastics superstar was competing at the Tokyo Olympics.

Simone Biles was mulling her Olympic future on Wednesday as athletes, celebrities and public figures led an outpouring of support after her decision to withdraw from the women’s team gymnastics event over mental health concerns.

US icon Biles, widely regarded as the greatest gymnast of all time and one of the biggest stars at the Tokyo Olympics, shocked the sporting world on Tuesday after abruptly pulling out of team final following a lacklustre opening vault.

The 24-year-old four-time Olympic champion later revealed she abandoned the competition due to concerns for her mental wellbeing.

“I have to focus on my mental health,” Simone Biles said.

“I didn’t want to go out and do something stupid and get hurt… At the end of the day we don’t want to be carried out of there on a stretcher.”

It was unclear whether she plans to compete in the remainder of the Olympics.

She is due to defend her individual all-around title on Thursday, and is also qualified for the individual apparatus finals on Sunday.

Simone Biles said late on Tuesday she would assess her readiness to compete on a “day-by-day” basis.

“We’re going to take it day by day, and we’re just gonna see.”

As Biles reflected on her remaining competition schedule, she drew broad support from athletes, officials, sports officials and public figures.

“Simone, you’ve made us so proud. Proud of who you are as a person, teammate and athlete,” tweeted Sarah Hirshland, US Olympic and Paralympic Committee chief executive officer.

“We applaud your decision to prioritize your mental wellness over all else and offer you the full support and resources of our Team USA community as you navigate the journey ahead.”

“Still the GOAT (Greatest Of All Time) and we are all just lucky to be able to see her in action,” Psaki wrote.

Two-time Olympic Alpine ski champion Mikaela Shiffrin offered support as well, tweeting: “@Simone_Biles keep whipping out that smile of yours cause it is undeniably golden. Always.”

Adam Rippon, who helped the US figure skating squad to a bronze medal at Pyeongchang in 2018, also backed Biles, tweeting, “I can’t imagine the pressure Simone has been feeling. Sending her SO much love. (It’s) easy to forget she’s still human. WE LOVE YOU.”

“I know that all of these athletes dream of this moment for their whole entire lives, and so I’m just completely devastated,” Raisman told NBC.

“I am obviously so worried and just hoping that Simone is OK.”

Raisman and Biles were among the gymnasts abused by former US team doctor Larry Nassar, who was jailed in 2018 for sexual abuse.

“It’s just so much pressure, and I’ve been watching how much pressure has been on her in the months leading up to the Games, and it’s just devastating. I feel horrible,” Raisman added.