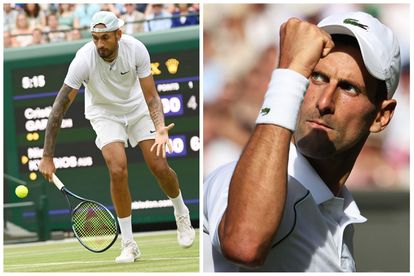 Djokovic has never beaten Kyrgios, losing both their previous clashes in straight sets.

“He plays lights-out every time he steps out onto the court,” Djokovic said when discussing Kyrgios. “Just [has] a lot of power in his serve and his game. So I’m sure he’s going to go for it. No doubt he’s going to be aggressive. I expect him to do that.

“He’s a big-match player. If you see his career, the best tennis he’s played is always against the top guys. That’s why we all respect him, because we know what he can come up with. It’s going to be [an] interesting match.”

“I just never thought that I would be [at this stage] at a Grand Slam. I thought that ship had sailed,” Kyrgios said after his quarter-final win.

“I didn’t go about things great earlier in my career and may have missed my window. I am really proud of the way I have come back out here.”

Kyrgios then learned he was a Grand Slam finalist when Rafael Nadal withdrew.

“I had a shocking sleep last night, though, to be honest. I probably got an hour’s sleep just with everything, like the excitement. I had so much anxiety, I was already feeling so nervous, and I don’t feel nervous usually,” Kyrgios said after the new broke.

“I just know there’s a lot of people that want me to do well and give my best. But I had a shocking sleep last night. Hopefully I can get some sleep tonight.”