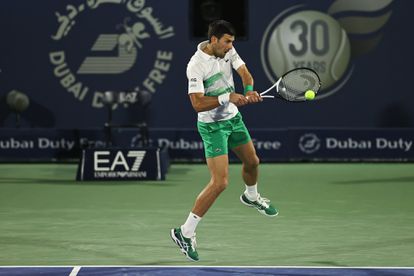 Novak Djokovic made a winning return to the tour after his deportation from Australia, beating Italian teenager Lorenzo Musetti in Dubai. Photo: Twitter @DobleFaltaOk

Novak Djokovic made a winning return to the tour after his deportation from Australia, beating Italian teenager Lorenzo Musetti in Dubai. Photo: Twitter @DobleFaltaOk

The drama flowed thick and fast in the ongoing saga involving Novak Djokovic at the Australian Open earlier this year, which started when the Serbian star flew into Melbourne claiming a vaccine exemption because of a positive PCR test result on December 16.

Border agents rejected his exemption, saying a recent infection did not qualify, tore up his visa and placed him in a detention centre.  But the vaccine-sceptic Djokovic’s high-powered legal team dramatically overturned the visa decision in court on a procedural matter related to his airport interview.

Many Australians were angered by the about-turn that had initially seen Djokovic receive the green light to play in the Australian Open, and his visa was ultimately cancelled for the second time, preventing his participation in the tournament that was eventually won by rival Rafael Nadal.

However, as the next grand slams of the year approach, it’s been revealed that Wimbledon’s All England Club has confirmed Covid vaccinations will not be needed to compete in this year’s tournament.

There are no plans for any coronavirus restrictions this time, while the 20-time Slam winner Djokovic, who has made clear he is not vaccinated, will also be able to compete at the French Open.

This year’s Wimbledon tournament will take place between June 27 and July 10.

Recently speaking exclusively to the BBC, Djokovic has spoken out for the first time since his deportation, and said he should not be associated with the anti-vax movement, but supported an individual’s right to choose.

Asked if he would sacrifice taking part in competitions such as Wimbledon and the French Open over his stance, he replied: “Yes, that is the price that I’m willing to pay.”

“I was never against vaccination,” he told the BBC, confirming that he’d had vaccines as a child, “but I’ve always supported the freedom to choose what you put in your body.

“I was never against vaccination. I understand that globally, everyone is trying to put a big effort into handling this virus and seeing, hopefully, an end soon to this virus.”

The Serbian star also went into further detail about his time spent in detention while in Melbourne and he insisted there was nothing untoward about his medical exemption.

“I was really sad and disappointed with the way it all ended for me in Australia,” he said. “It wasn’t easy.”

“Absolutely, the visa declaration error was not deliberately made. It was accepted and confirmed by the Federal Court and the minister himself in the Ministry for Immigration in Australia.

“So actually, what people probably don’t know is that I was not deported from Australia on the basis that I was not vaccinated, or I broke any rules or that I made an error in my visa declaration. All of that was actually approved and validated by the Federal Court of Australia and the Minister for Immigration.

“The reason why I was deported from Australia was because the Minister for Immigration used his discretion to cancel my visa based on his perception that I might create some anti-vax sentiment in the country or in the city, which I completely disagree with.”

Prior to the Aussie Open, a video emerged to show two Australian news anchors launching a foul-mouthed hot mic tirade about the World No 1 tennis player.

Rebecca Maddern made the comment of Djokovic being a “lying, sneaky asshole” during an advert break on Melbourne’s 7NEWS on Tuesday.

Maddern’s co-host also called the Serbian an “asshole” who has fallen “over his own f***ing lies”.

You can watch the video and comments made about Djokovic below: