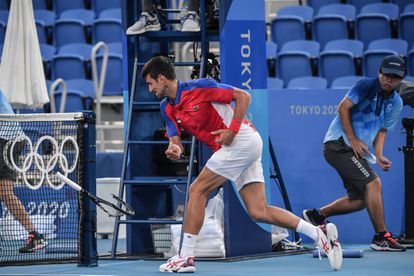 Novak Djokovic has thanked people “around the world” for their support since he was refused entry to Australia over his Covid vaccine status. Photo by TIZIANA FABI/AFP via Getty Images

Novak Djokovic has thanked people “around the world” for their support since he was refused entry to Australia over his Covid vaccine status. Photo by TIZIANA FABI/AFP via Getty Images

Djokovic cut a frustrated figure, having seen his hopes of a golden slam dashed by Alexander Zverev on Friday.

The Serbian, who has won all three of the Grand Slam tournaments held so far this year, hurled his racquet into the empty stands and smashed another on a net post as he lost his cool on his way to defeat.

With that Busta consigned Djokovic to his first pair of successive defeats since the 2019 ATP Tour Finals.

The Bronze medal match proved to be an enthralling encounter which played out over two hours and 47 minutes in sweltering Tokyo heat.

Djokovic, saved a match point in the second set tie-break to force a decider and then four more late in the third set.

However Carreno Busta’s power game told as he struck 32 winners in an excellent performance, while Djokovic managed just 18.

To cap a frustarting day for Djokovic, he would commit the error that handed Carreno Busta the medal, putting a forehand into the net.

Djokovic regrettably conjured memories of his infamous default against Carreno Busta last year at the US Open, when he inadvertently struck a ball at a line judge. He tossed his racquet high into the empty stands as he blew a break point in the opening game of the third set and continued to cut an angry figure, destroying another racquet after a miss at the net, shortly afterwards.

Djokovic will have a second chance to add to his 2008 Olympic singles bronze later on Saturday, when he and compatriot Nina Stojanovic take on Australians Ashleigh Barty and John Peers in the mixed doubles third-place play-off.