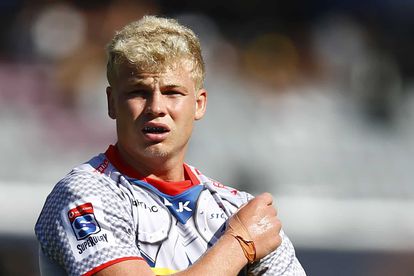 The Stormers Johan du Toit was at best over-eager when he flew into an airborne Louis Schreuder right off the kick-off in Saturday’s Super Rugby meeting against the Sharks.

Du Toit was given a yellow card despite the TMO’s advice that it should have been red and the citing commissioner agreed with the video official.

“Johan du Toit of the Stormers has been cited for alleged foul play during a Super Rugby match at the weekend,” a SANZAAR statement reads.

“Du Toit is alleged to have contravened Law 9.17 during the match between the Sharks and Stormers at Kings Park in Durban on 14 March 2020.”

Law 9.17 reads: A player must not tackle, charge, pull, push or grasp an opponent whose feet are off the ground.

“Upon further review of the match footage, the Citing Commissioner deemed in his opinion the incident had met the Red Card threshold for foul play,” the SANZAAR statement continues.

“The Case is to be considered in the first instance by the SANZAAR Foul Play Review Committee which will take place on Monday 16 March 2020, 9am(SAST), 6pm(AEDT), 8pm(NZDT) via video-conference.”

All SANZAAR disciplinary matters are in the first instance referred to the Foul Play Review Committee to provide the option of expediting the judicial process.

For a matter to be dispensed with at this hearing, the person appearing must plead guilty and accept the penalty offered by the Foul Play Review Committee.

Super Rugby may be suspended but Du Toit is not the only player facing the Foul Play Review Committee.

Hugh Roach of the Crusaders received a Red Card for foul play during the Super Rugby match against the Sunwolves.

Roach is alleged to have contravened Law 9.12 during the match between the Sunwolves and Crusaders at Suncorp Stadium in Brisbane on 14 March 2020.

Law 9.12 reads: A player must not physically abuse anyone.

Physical abuse includes, but is not limited to: Striking with the elbow.

Roach was given a straight red card for his actions and could face a lengthy spell on the sidelines given the nature of his offence but there could be mitigating factors.