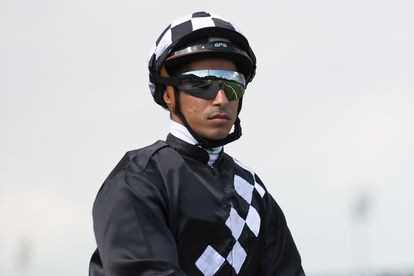 SINGAPORE – MAY 17: Jockey Nooresh Luglall during Singapore International Airlines Cup day at Kranji Racecourse on May 17, 2015 in Singapore. (Photo by Neville Hopwood/Getty Images)

SINGAPORE – MAY 17: Jockey Nooresh Luglall during Singapore International Airlines Cup day at Kranji Racecourse on May 17, 2015 in Singapore. (Photo by Neville Hopwood/Getty Images)

South African Jockey Academy graduate Nooresh Juglall succumbed to injuries suffered in a fall while racing in his native Mauritius.

Jockeys formed a guard of honour and rode with black armbands at Durban’s Greyville Racecourse on Sunday 16 May in memory of their colleague Juglall.

Jockey dies after fall in Mauritius

Juglall is understood to have fallen during the 990m Gr3 Noble Salute Cup at the Champ de Mars Racecourse in Port Louis, Mauritius.

Four jockeys fell during the course of the Champ de Mars opening day including Malaysian jockey Benny Woodworth, who was reportedly involved in the incident which left Juglall with fatal injuries.

Woodworth’s mount, Golden Tractor went down in their first running at the track which features a road-crossing which has been fingered as the cause of the incident.

Juglall had been closely following Golden Tractor on Rule the Night and was unable to avoid getting caught up in the incident. Woodworth escaped with a serious elbow injury, while his mount Golden Tractor had to be euthanized, having fractured his shoulder.

Tellytrack racecaller Brandon Bailey labelled the road as the issue in the heat of the moment “They will have to do something about that road,” he exclaimed as Juglall lay bleeding.

Juglall was rushed to the City Clinic but sadly succumbed to his injuries some hours later.

A popular and talented rider Juglall tasted success on the track in South Africa winning the Triple Tiara on Cherry On The Top for Ormond Ferraris and the Gold Cup on Dynasty’s Blossom for Joey Ramsden before continuing his career in Singapore.

Juglall had only recently ended his time in Singapore, citing family as his reason for shifting back to his native Mauritius. He is is survived by wife Chaaya and young family, as well as his father Satanand, his mother Kavita, his sister Sweta and younger brother Tajesh, also a Jockey who rides in Mauritius.