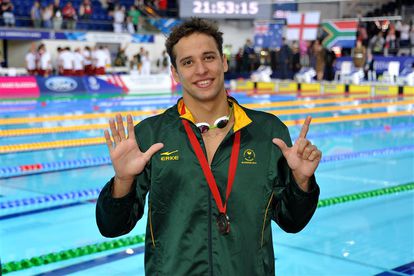 GLASGOW, SCOTLAND. 29 July 2014. Commonwealth Games. Swimming. Chad le Clos talked the talk and then he walked the walk (swam the swim?). Two bronze medals in the pool on earlier tonight in Glasgow — one secured by the length of a chewed fingernail — took his tally to seven, equalling the Commonwealth Games record […]

GLASGOW, SCOTLAND. 29 July 2014. Commonwealth Games. Swimming. Chad le Clos talked the talk and then he walked the walk (swam the swim?). Two bronze medals in the pool on earlier tonight in Glasgow — one secured by the length of a chewed fingernail — took his tally to seven, equalling the Commonwealth Games record […]

Speaking at the premiere, director Sir Matthew Pinsent shared his experience filming and getting to know the le Clos family.

“Initially the film was supposed to purely be a sports story with a sidebar of the le Clos family,” he explains.

But as Chad’s father Bert developed prostate cancer, and then his mother Geraldine saw her breast cancer return, so Chad’s world began to crumble around him.

His parents refused to let filming of the 60-munite documentary stop during their cancer treatment.

This resulted in the most painful scene of Chad saying goodbye to his mum, 48 hours after she’d had a double mastectomy.

“Gerry said, ‘You’ve got to film it’,” says Pinsent, who felt incredibly awkward intruding on that moment.

So Chad went off to train, not knowing if both his parents will make it to Rio to watch him. “His parents desperately want to be there,” says Pinsent.

The documentary features Chad’s training pool in Pinetown, Durban, which he shares with many a floating insect. It’s a far cry from the facilities of Phelps and others in the United States. “They [the world’s best] would not put one toe in this pool,” says Bert.

And yet training in the States was never an option for Chad.

“Chad said, ‘No I’m going to stay here in Durban in Pinetown and I’ll rely on my dad to drive me around, cook me steak and my mum to do my laundry,” Pinsent told TheSouthAfrican, referring to Chad’s comfortable life as a bit of a man-child.

He explains that Chad is extremely reliant on the support structure around him. “I don’t think you can unhook Chad from his family. He actually WhatsApps his dad just before he starts a race,” Pinsent says.

“It makes what he achieved in London in 2012 all the more amazing.”

In the documentary Chad expresses a desire to raise the profile of swimming in South Africa. “He wants to change the game in South Africa, so swimming will be up with rugby, cricket and football,” explains Pinsent.

“Because there is no doubt, the South African Olympics team could be better than they are,” says Pinsent.

“If you look at the South African Olympics performance, it’s there or thereabouts, but it’s not a superpower.

“And you think: Australia’s a super power, New Zealand’s a superpower, why not South Africa? Why couldn’t it be?

“Because it runs through your guys’ blood in a way that almost in the UK we’ve had to relearn and reinvigorate ourselves about it,” he says.

On 31 July 2012 Chad, and his larger-than- life father Bert, became global stars when the 20-year-old Chad pulled off the ‘unbelievable’ by beating Michael Phelps to Olympic Gold.

Phelps has come out of retirement for one last shot at the Games, and at Le Clos, who he should face in the 100m and 200m butterfly in Rio on August 8th and 12th.

The incredible story of London 2012 champion’s brutal journey to the Rio Games is revealed in ‘Unbelievable: The Chad le Clos story’.

The documentary will be available on 24 July at 6pm on the OneToWatch YouTube channel.