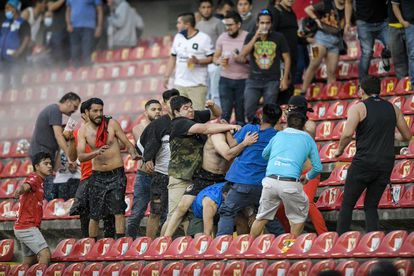 A brawl broke at a match in Mexico between mid-table Queretaro and last year’s Liga MX champions Atlas. Photo: Twitter

A brawl broke at a match in Mexico between mid-table Queretaro and last year’s Liga MX champions Atlas. Photo: Twitter

The incident occurred during a Mexico top-flight match between hosts Queretaro and Atlas from Guadalajara, the reigning league champions.

The match was suspended in the 62nd minute when multiple fights broke out in the stands. Security personnel opened the gates to the field so that fans, including women and children, could escape the stands as chaotic scenes ensued.

According to Marca, the authorities of Queretaro officially claim that 22 people were injured and nine were hospitalised, but local media believes that there is at least 17 dead after the brutal fan fight escalated into terrifying acts of violence.

The world football governing body, FIFA, has released a statement to condemn the incident.

“FIFA is shocked at the tragic incident that took place at La Corregidora stadium in the city of Queretaro during the fixture between Queretaro and Atlas,” the statement read.

“The violence was unacceptable and intolerable. FIFA joins the Mexican Football Association and Concacaf in condemning this barbaric incident and encouraging the local authorities to bring swift justice to those responsible.

“Our thoughts are with all those who suffered its consequences. Once again FIFA would like to stress that violence should have absolutely no place in football and we will continue working with all parties to eradicate it from our game.”

After the fight broke out, players from visiting Atlas were said to have fled to the locker rooms along with some from the Queretaro side. Other Queretaro players, including Uruguayan keeper Washington Aguerre, apparently stayed on the sidelines to try to calm the fans.

After several minutes some of the fights moved to the field, where the brawls continued to escalate. Some people were armed with chairs and metal bars.

One fan could be seen pulling a knife to cut the nets of one goal. Others destroyed one side’s bench and some fought in the tunnel.

“The darkest day for Mexican soccer,” was the front-page headline in the Mexican newspaper El Universal on Sunday.