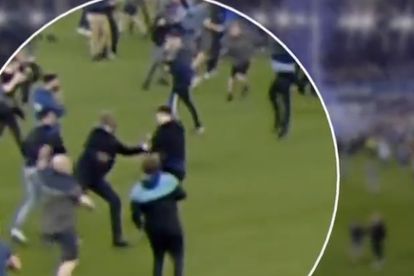 Television footage showed Vieira being taunted by an Everton supporter as fans ran on to the pitch at full-time, with Crystal Palace having suffered a 3-2 defeat.

The Frenchman could be clearly seen receiving abuse before kicking out at the fan, who fell to the floor before Vieira was eventually ushered away by other supporters.

BREAKING: JALI, SHALULILE AND LETSOALO UP FOR PSL PLAYER OF THE SEASON!

“I have nothing to say about that,” Vieira said when asked about the incident during his post-match presser.

However, Everton manager Frank Lampard said he understood how tough the situation would have been for his counterpart.

“I feel for Patrick. I didn’t get him at the end. I would have said, ‘come in with us’ – although he might not have wanted that. Of course he ran 80 yards across the pitch and it’s not easy.

“It was pure elation of fans who have come on the pitch after avoiding relegation. If it is done in the right way let them stay on the pitch, let them have their moment. As long as they behave, no problem.”

You can watch the incident involving Vieira below:

Earlier, talkSPORT host Darren Ambrose explained how he was once left ‘dodging punches’ during a pitch invasion while playing for Crystal Palace.

“We’re celebrating, they’re singing and cheering, I turned to the right and obviously all the Sheffield Wednesday lot had come onto the pitch.

“I see a lady, she was laying on the floor where she’d obviously just been attacked. This is all public knowledge, this went to police inquiries and everything at the end of the season.

“Dougie Freedman was running around saying ‘get in,’ and I was dodging punches basically.