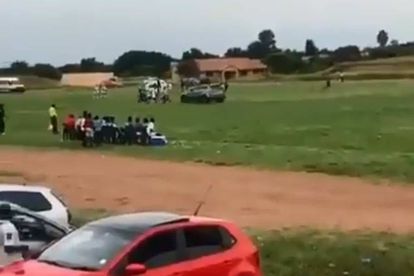 We’re not going to lie, we’ve defiitely all thought about it. But to actually go ahead and do it is, well, utter lunacy. One apoplectic football fan was so angered during an ABC Motsepe League game in North West, he got behind the wheel of his BMW X5 and sped onto the pitch – with only one target in mind.

It’s alleged by several witnesses that the irate supporter was aiming for the referee. Luka Ball Controllers were at home to Polokwane City Rovers this weekend. The away side pulled into a 2-1 lead with 15 minutes to play, but the way the game panned out proved to be too much for this person who, let’s be honest, has hardly helped the way most South Africans view BMW drivers either…

Conveniently parked at the corner of the Letlhabile pitch, the motorist speeds the length of the turf and catches up with the referee. He’s able to dodge the vehicle, but it soon circles back and charges towards a terrified bench. The car comes to a stop without hitting anyone, and the ref rage allegedly subsides after a brief rampage.

Apparently he wanted to run over the referee ?. TF?! #ABCMotsepe pic.twitter.com/dqjUCUyIHv

The BMW times its run to perfection, springs the offside trap nicely, and shows a great turn of pace to go from box-to-box. But it looks like a hefty punishment is in store for the fan, and the Luka Ball Controllers too. As the home side, they are being held responsible for this act of threatening behaviour.

The home team [Luka Ball Controllers] will be charged for breaching Safa’s uniform rules and regulations since they failed to provide security for both teams‚ spectators and match officials. It will be the responsibility of the club owner to identify the perpetrator of the incident.”

Meanwhile, the South African Football Players Union also expressed their disdain, saying that such a ‘barbaric’ act had no place in the sport.

‘We as #SAFPU are shocked to have witnessed such barbaric behavior. There is no place for it in football. We will be meeting in earnest with @SAFA_net to resolve.’ Sec. Gen Nhlanhla Shabalala on #ABCMotsepeLeague incident over the weekend. pic.twitter.com/vSXVs5GyNB

All footie fans have been driven crazy by referees, but even in their wildest fantasies, even the most passionate PSL fans probably wouldn’t take it this far… well, that’s easy to say now: When we get VAR, our pitches might start to look like the fast lane of the N2.