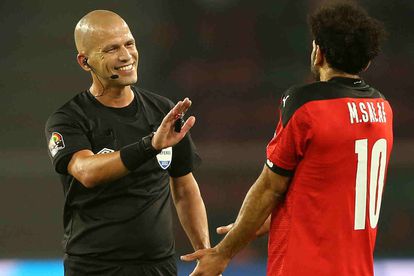 South African referee Victor Gomes says that he didn’t seek the spotlight in his viral interaction with superstar Mohamed Salah.

Victor Gomes feels that the incident is a teachable moment for referees worldwide.

The man with the whistle says that referees need to adapt to the demands of the modern game.

Like any other top referee, Gomes is accustomed to having his ear chewed off by players.

He says that sometimes you have to put players in their place with the right amount of respect.

Gomes is happy that the incident was received positively and was laughed off by the Liverpool man.

Referees have to evolve as well says Victor Gomes

Victor Gomes has received praise from across the globe for his showing at AFCON, also standing out as perhaps the best official on the continent.

“I respect the players that I officiate with and I don’t like to talk about the decisions I make on the field,” Victor Gomes said during a media event on Thursday.

“However, I do like to highlight some points for educational purposes, and I also believe we have a responsibility to report positively on football matters so that our work is understood.

“Football has evolved tremendously, and so have the players, who are highly respected and paid. Refereeing also has to evolve in that manner.

“We can’t stick to the old adage of officiating in a set way and style. All I can say is that on Sunday, I chose to manage a top-class player in a way I thought would be deemed appropriate and responsible. Football was the ultimate winner on the day.”

Gomes has returned to South Africa and will take up his place among the Nedbank Cup officials this weekend.

He served our country with honour and distinction on the global stage and certainly deserved his plaudits.