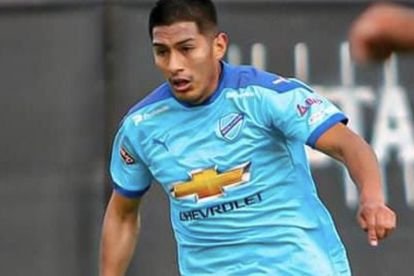 According to reports that emerged from Bolivia over the weekend, Sundowns have sensationally completed the signing of Saavedra Flores from Bolivar, with the deal reported to be worth a staggering R18.5 million ($1.2 million).

iDiski Times reports that 25-year-old attacker is expected to arrive in South Africa after the FIFA 2022 World Cup qualifiers, with Bolivia set to play Venezuela away and Chile at home between 28 January and 1 February.

“In the last hours, I have been able to speak with Saavedra himself, and he’s preparing the visa papers to travel to South Africa as soon as possible. For local football and for the club, this is an excellent financial and sporting transaction,” Bolivian football journalist Agustin Suarez told iDiski Times.

“It is hoped that with this step in Erwin’s career, the possibility will open up for other Bolivian players to reach Mamelodi in the future. We know the greatness of the Brazilians, and that the South African league is really powerful. We expect the transfer to be announced soon.”

Suarez was one of the first journalists to report on Saturday that the move to Sundowns was on the verge of being completed.

Sundowns have also hinted that a big signing could be imminent

“Every window there is work to be done. I think we are very close to concluding one transfer, incoming,” Mamelodi Sundowns co-coach Rhulani Mokwena said late last year.

“We are very close, but I am tight-lipped on that one. The club will release a statement. We are close to signing a player who will be very important for us this season and we felt that we needed a bit more cover with regards to a specific position.

“Mamelodi Sundowns don’t have that type of profile, and an interesting profile. Hopefully, we can still strengthen with one or two others, but we won’t be doing too much business in this January transfer window. Maybe one or two to go out on loan.”

According to further reports by FarPost, an official announcement regarding the sensational transfer will be made by Bolivar in the coming days.