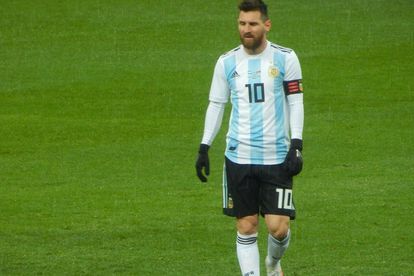 Saudi Arabia pulled the first major upset of the 2022 FIFA World Cup as they beat Argentina 2-1 in their opening game on Tuesday afternoon.

Argentina went into the encounter against ‘minnows’ Saudi Arabia as strong favourites  after going 36 games without a defeat.

However, Saudi Arabia showed the world how to beat them as they scored two second half goals to claim their first three points of the tournament.

Lionel Messi opened the scoring for Argentina 10 minutes into the encounter after his team was awarded a penalty, and they looked fully in control of the match.

Saudi Arabia, though, didn’t play like a team that’s willing to let Argentina boss them around as they held their own and actually took the game to the opponents.

They were rewarded early in the second half as Al-Shehri equalised three minutes after the restart.

Saudi Arabia made it 2-1 through Al-Dawsari who scored a beautiful goal from outside the box in the 53rd minute.

Saudi Arabia managed to hold on to their lead in the remaining minutes of the second half for the win that will go into the history books.

HOW ARGENTINA LINED UP AGAINST SAUDI ARABIA