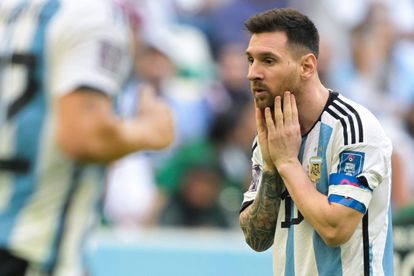 Argentina captain Lionel Messi says they did not expect to suffer defeat at the hands of Saudi Arabia in their FIFA World Cup opener on Tuesday.

La Albiceleste lost 2-1 to Saudi Arabia in front of a vibrant crowd at the Lusail Stadium.

Messi opened the scoring, finding the back of the net from the penalty spot before Saleh Alshehri and Salem Aldawsari netted goals for Herve Renard’s men.

“It is a very hard blow for everyone,” Messi said after the match according to Birmingham Live.

“We did not expect to start this way. Things happen for a reason.

“We have to prepare for what is coming, we have to win, and it depends on us. There are no excuses.

“We are going to be more united than ever. This group is strong, and we have shown it. It is a situation that we haven’t gone through in a long time. Now we have to show that this is a real group.

“We knew that Saudi Arabia is a team with good players, that they move the ball well and that they push (forward) the (defensive) line a lot. We worked on it, but we rushed a bit. We have to go back to the base of who we are. We have to think about what’s next.”

‘Not the one’: Black Coffee done being the ‘face’ of GBV campaign