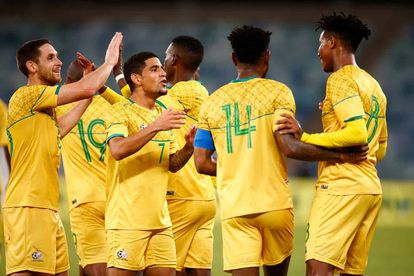 South Africa players celebrate a goal scored by Bongani Zungu during the Afcon qualifier between South Africa and Sao Tome and Prncipe at the Moses Mabhida Stadium on 13 November 2020 in Durban, South Africa. Photo by Steve Haag Sports/Backpagepix

South Africa players celebrate a goal scored by Bongani Zungu during the Afcon qualifier between South Africa and Sao Tome and Prncipe at the Moses Mabhida Stadium on 13 November 2020 in Durban, South Africa. Photo by Steve Haag Sports/Backpagepix

The fixture is billed as a home game for the islanders, following an agreement between the two football federations to have both matches held on South African soil.

After a hard-fought 2-0 victory where Bafana Bafana battled to break down the visitors’ defence, they will be looking for a much more assured performance in the Windy City.

Coach Molefi Ntseki will, however, have to make do without Orlando Pirates defender Innocent Maela, who featured in the previous encounter.

The player will not be part of the matchday squad, as he has been ruled out of the tie, with Mamelodi Sundowns star Lyle Lakay drafted into the squad.

“Of the travelling team, only Innocent Maela sat out of training on Sunday, 15 November 2020 suffering from a slight knock he received in the Durban match on Friday and is likely to sit out on this encounter,” The South African Football Association (Safa) stated on their official website.

There are some good news for the South Africans, with Sundowns striker Kermit Erasmus back in full training after missing the match in Durban.

Safa also revealed that Rangers midfielder Bongani Zungu, who scored the second goal on Friday, is set to start in Port Elizabeth.

“Lyle Lakay is expected to be drafted in his (Maela) place while Zungu who had a blinder of a game soon after coming on during Friday’s match, is set to earn a starting berth,” Safa continued.

The match will kick off at 15:00 (SAST) and will not be aired on South African TV, but is available on SABC radio.

Wife kills husband in front of their minor child in Buffelsdale, KZN