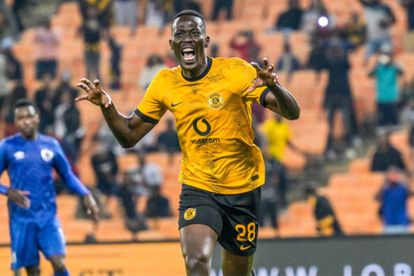 Kaizer Chiefs’ new striker Bonfils-Caleb Bimenyimana has given Amakhosi fans a reason to trust him with his in front of goal role.

The Burundian striker demonstrated persistence when he bagged a brace in the Glamour Boys’ 2-1 win over SuperSport United after having earlier in the game faced some booing from the fans after he missed a free header.

This past week, the 24-year-old forward was one of the main subjects in the DStv Premiership with Chiefs’ fans claiming to have found a solution to their lack of goals issue.

Reflecting on his performance after the game, Bimenyimana said when he is at his best he can do more than what he did against the Pretoria-based side.

This left one wondering if he can be better than that, perhaps yes he can.

If he can rattle the back of the net twice in his early days at the club while under pressure, imagine when he has settled.

BIMENYIMANA ON HIS PERFORMANCE AGAINST SUPERSPORT

“Yah today I scored two goals but I think I could score more but that is football,” Bimenyimana told SuperSport TV.

“I was trying every time to score, I only scored two and I still have a lot to improve [on] because in this game I see that I was not my self.

“I think I can be more better than this, that is how I feel because I know myself I can give more, more than what I give today but I’m happy for the two goals and the win for the Chiefs family.”